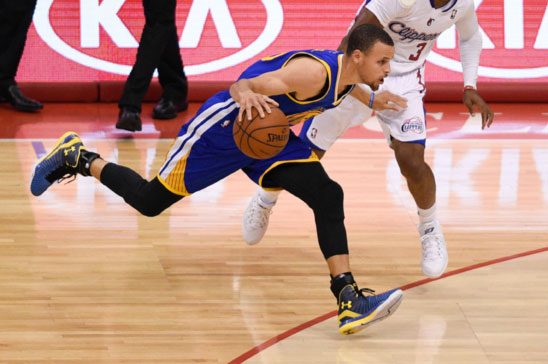 In his first public comments since the team fired head coach Mark Jackson and replaced him with Steve Kerr, Warriors guard Stephen Curry said the team’s coaching turmoil was a “weird, expedited situation.” Curry also said the speed that Kerr was hired was “kind of a shock.” Via ESPN:

In his first extended public comments since Mark Jackson was fired, Curry said Thursday that he voiced his support for the coach but the team “made a decision otherwise.” He also said the “semi-quick hire” of Steve Kerr was “kind of a shock” to most of his teammates.

“There’s no sugarcoating it — it was a weird, expedited situation that we didn’t see coming,” Curry said. “And guys are human. You have to be able to adjust to it and have some time to respond. That’s kind of what happened. I think we’ll be fine once we have a clear picture of what’s going on next year.”

Curry had been the strongest supporter of Jackson before the Warriors dismissed the coach May 6 after a 51-win season and back-to-back playoff appearances. Golden State agreed to a five-year, $25 million deal with Kerr on May 14 and introduced him at a news conference in Oakland on May 20.

Even with owner Joe Lacob and general manager Bob Myers going against Curry’s request for Jackson to stay, the All-Star point guard insists he still believes in the franchise’s commitment to winning.

“One thing I can say about this organization, they want to win,” Curry said. “Each decision is geared toward winning. That’s something that flies well with a lot of players — that they’re going to try to put us in the best position to win. Obviously, I had a certain opinion of Coach Jackson that they made a decision otherwise, and I heard the reasons, but I won’t dwell on it.

“As long as we’re focused on winning and taking advantage of the roster we have and the opportunity we have with this window to try to continue to get better, I’m just looking forward to next year and getting back to making that happen,” Curry said. “I haven’t lost faith in that at all. As much as I supported Coach Jackson and loved everything about playing for him, I think they’re about winning.”