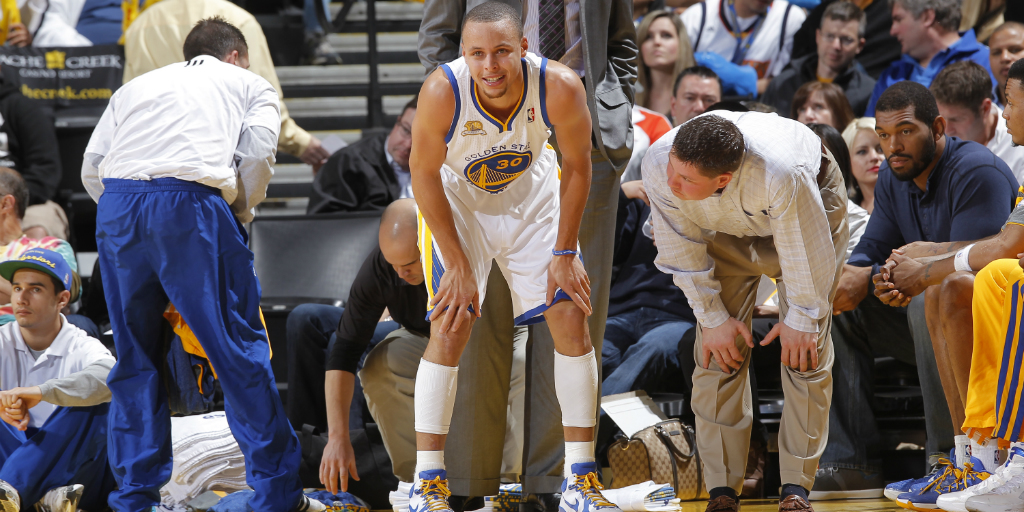 Before Stephen Curry was a back-to-back MVP and superstar, he was limited by ankle injuries that held him to 26 games during the 2011-12 season. Curry has since recovered and is now considered one of the most lethal shooters in League history.

In Marcus Thompson’s new book, Golden: The Miraculous Rise of Steph Curry, Thompson chronicles the time when Curry attended then Warriors coach Mark Jackson’s church and had his injured ankle anointed with oil as the congregation prayed for his health.

A part of the tradition at Jackson’s church was a spirited service including worshippers jogging along the walls of the congregation in praise. Curry, two days removed from his latest sprain, found himself taking laps with Jackson and the other members filled with the spirit. Then after Jackson’s sermon, his wife and co-pastor, Desiree, continued the worship with an impromptu sermon and benediction. She also called Curry to the altar.

They took off his shoes and socks, anointed his ankle with oil and prayed for healing. The parishioners lifted their voices in chants and amens, calling on God to bless one of His Christian ambassadors. Service at Jackson’s church was much more passionate and engaging than Curry was used to back in Charlotte. But he humbly accepted the blessing that was being offered and returned to his seat with a smile on his face.

According to Thompson, Curry, who had sprained his ankle in a preseason game two days prior, began hopping on one foot, “much to the delight of the congregation:”

“Where you going?” Desiree asked the star point guard in front of the congregation. Curry responded with his go-to look of bewilderment, a half smile and widened eyes. He thought he was supposed to return back among the flock when she was done.

It took Curry a second to understand what she meant. Then the old Bible stories rushed to his mind. Like when Jesus healed the lame man at the Pool of Bethesda, that man had to pick up his mat and walk. If he believed he was healed, he needed to show it.

So Curry started shimmying and hopping on his right foot, much to the delight of the congregation.

“I didn’t know what else to do,” Curry said.

Following his injury-shortened season in ’11-12, Curry has played in no less than 77 games per season.

Stephen Curry: It’s Comical That People Were Saying I’m Having a Down Year