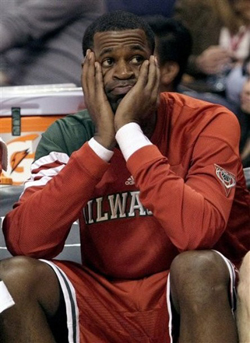 Rip’s out for a minute, Stephen Jackson is wasting on bench. And Jax was openly talking to longtime SLAM contributor Aggrey Sam yesterday about playing for the Bulls. And… the trade deadline is next week. Oh boy. “That doesn’t mean players on other teams, particularly title-starved veterans, don’t covet an opportunity to play for the Bulls. Take Bucks swingman Stephen Jackson, a name bandied around in the past as a potential Bulls target. […] ‘Who wouldn’t want to play with Derrick Rose? Right up the street; it would be a great fit for me. I don’t think anybody in the league would say they wouldn’t want to do that, but me, at the end of the day, I just want to play. I’ve been a competitor my whole career, I’ve won everywhere I’ve went, so at this point, I just want to get back on the court and do what I do best, wherever that is,’ Jackson told CSNChicago.com Wednesday morning. ‘I’m just here, working out every day, just waiting for my opportunity, so I can be ready, but that’s always my goal, to win a championship and I know being on a team like that, it wouldn’t be that hard.'”