Stephon Marbury Has Some Advice for Bassy 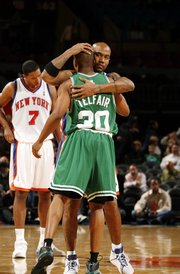 Say what you will about Stephon Marbury, but at least you never have to twist the guy’s arm to get him to express his feelings. For example, how does he feel about his old GM Kevin McHale (who Sebastian Telfair, Steph’s cousin, now has to play for in Minny)?

“When I do speak to (Sebastian) I’ll wish him good luck and tell him to be careful around Kevin McHale,” Marbury said.

“As far as my little cousin, I wish him all the best because he’s got to deal with Kevin McHale,” Marbury said. “I wouldn’t want to play for Kevin McHale. When I left, all of a sudden I became a bad person from his standpoint. I became selfish and jealous of Kevin [Garnett].”

I don’t think anyone wants to play for Kevin McHale, Steph. But hey, good luck, Bassy!

As for the ’07-’08 Knicks, Marbury has a new nickname for them: “Our new nickname is nice and nasty. That’s how we’re coming.”

Nice and Nasty. It doesn’t make sense, which is probably why I like it.