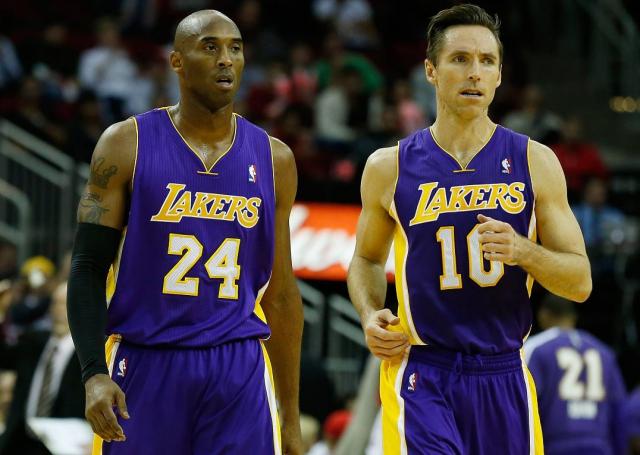 Nash made Bryant extremely happy by calling him the ultimate a-hole (but in a good way … we think):

It’s interesting that he equates joy with hard work, as if it must be earned. In Kobe’s world, anything that comes easy is, by its very nature, not worth treasuring. He sees his role on the Lakers in the final third of his career as, in essence, a—— in chief. “You can’t afford to placate people,” he explains, his voice rising. “You can’t afford to do that. You’re a leader. You’re not here to be a social butterfly. You’re here to get them to the promised land. A lot of people shy away from that because a lot of people want to be liked by every¬body. I want to be liked too. But I know that years from now they’ll appreciate how I pushed them to get us to that end result.”

Bryant sits back, letting the thoughts sit in the air for a moment. Then he continues. “It’s never easy, man. This s— is hard. So when players look in the distance and see us winning championships and see us celebrating and having a good time, they think, ‘Oh, this is what leadership is, this is how you win, everyone gets along, we’re all buddy-buddy, we all hang out, blah, blah.’ ” […] Bryant shifts in his seat, leans forward. “No it’s not like that. You talk to Lamar [Odom], Adam Morrison. We were at each other’s throats every day. Challenging each other, confronting each other. That’s how it gets done. But that’s hard, because it’s uncomfortable, right? It’s uncomfortable.”

This approach—Bryant likens it to the unpleasant task of telling a dinner mate he has “s— in his teeth”—does not go over well all the time. Like with Dwight Howard, for example. Others appreciate it. During filming (of the upcoming documentary, “Kobe Bryant’s Muse”, (director Gotham Chopra) interviewed a number of Bryant’s teammates, current and former, and he asked them to describe Bryant in three words. After each interview Kobe would text Chopra, eager to hear what people said. Most answered with some variation of “the ultimate competitor” or “killer instinct.” But when Chopra asked Steve Nash, he said something different. After thinking for a moment, Nash answered, slowly, in three beats: “Mother . . . f—— . . . a——.”

Kobe thought this was awesome.