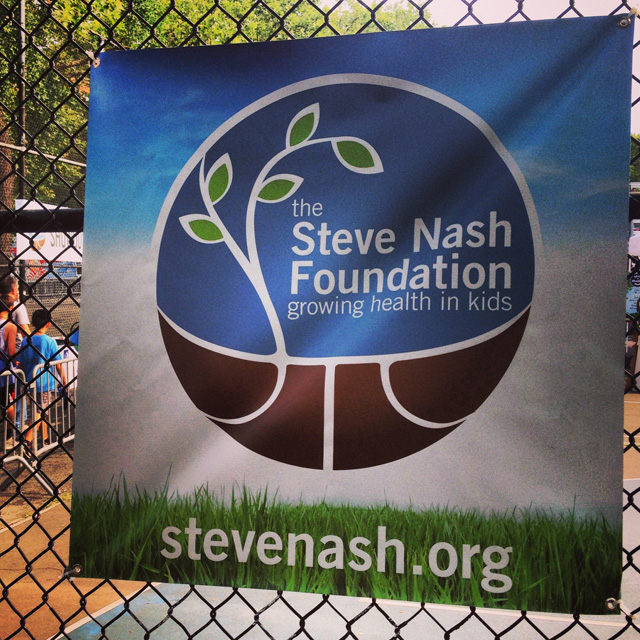 Steve Nash is the only NBA player that has a soccer clause in his contract, which allows him to participate in the other sport that he regularly enjoys. Nash is so enamored by the beautiful game on the pitch that he wears the number ten with the Lakers, a number generally reserved on soccer teams for the leaders and most skilled performers. Soccer is the number one game on the planet, Nash’s second athletic passion— and an amazing vehicle to support and protect kids.

The showdown in Chinatown is a ‘friendly’ with a roster of NBA and futbol stars to raise money for the Steve Nash Foundation; a global organization dedicated to assisting underserved children in their education, health, personal development and overall quality of life. Nash attributes his panoramic worldview to his parents, whom never sheltered him from the inequalities and injustices that exist. Being in a position where he can eradicate certain problems through systemic changes; the Nash Foundation provides grants for child-focused non-profits, medical services in poverty-stricken areas, community reengagement for victims of sexual abuse and interpersonal violence and environmental education via sustainable practices. Nash firmly believes, and substantiates with the foundation’s research that child abuse can be eradicated. “There is scientific data to support this beyond a lofty goal,” explains a hopeful Nash.

The showdown in Chinatown has quickly become the unofficial kick off to summer. By raising money and bringing awareness to the foundations’ work, Nash has concurrently galvanized this charming Lower East Side nook of the city, which doesn’t often have world-class athletes running around on its less-than-perfect fields. “It is a real treat when you have guys like Dirk, Kyrie, Dunleavy and that guy from the Red Bulls coming to our hood,” says Cody and Coby Garaballo, two brothers who live down the street from the park (… and are convinced that Melo is heading to Chicago.)

Being that the World Cup is on, the NBA is exuberant in one of its most exciting off seasons ever— and since Nash’s old Dallas teammate was finally able to participate, there seemed to be an extra buzz surrounding this year’s event. Nash offers, “I just got back from the World Cup.  There are more Americans down there supporting the guys than any other country. It really is a special time and it can be felt here today.”

Nash is not so much political as he is about doing what is right. His battles for social justice and humanitarian causes have been well documented. Whether it has been speaking out against Arizona’s Senate Bill 1070, which racially profiled and criminalized anyone looking like an undocumented immigrant, or being one of the first in the league to vocally support LGBT rights, Nash see’s sports as a tremendous teaching tool.  “Leadership, discipline, teamwork, practice, winning and losing offer so many important life lessons.  He continues, “Sports is a wonderful teacher, similar to music…  young people tap into new languages and forms of expression.”

Steve Nash is a two-time MVP and one of the league’s top all-time play makers, achieving a Hall of Fame career from his ability to make those around him better. He is now extending a helping hand and foot, by enabling young people in Uganda, Phoenix, Canada, Paraguay, Los Angles and New York the equal opportunity to win.

Did You Know: Stephen Curry Scoring With the Best of Them At the Rim

Brooklyn Promotes Jacque Vaughn to Head Coach of the Nets