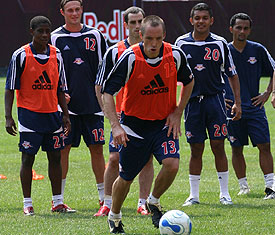 Your two-time MVP, Steve Nash, showed up yesterday to practice with the New York Red Bulls, our local MLS team, and the way they’ve played this season, he probably made them ten times better just by showing up.

Of course, Steve has always been a soccer fan. His dad coached, his brother Martin played on the Canadian National Soccer team, and his sister played at D-1 power Santa Clara. A few years ago, Nash even played in a game up in Victoria, Canada.

Anyway, two years ago Steve and I talked about soccer and I asked him to pick his NBA dream eleven…

“Any point guards from the NBA would be an asset in soccer. And some of the guys, with their builds, would be really outstanding, I think.

In soccer, a guy that’s 6-2 is considered tall. So someone like Stephon Marbury would be a massive striker or defender. All those big point guards — guys like Marbury or Chauncey Billups — their jumping ability and strength would be incredible in the air. And they’d certainly be able to handle the pace.

Another guy I’d like to see play is Jason Kidd. He would be an incredible soccer player. His size, his speed, his creativity…he’d be ridiculous.

Also, some of the NBA shooting guards — like Ray Allen or Kobe — up in the air with their height and ability, could control boxes and be really amazing in the midfield.

In the goal, I think Andrei Kirilenko would be an incredible keeper. Not too many shots would be getting past him.”