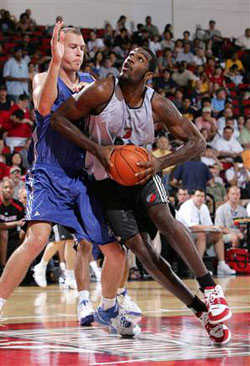 But hey: Achilles had his heel, Greg has his tonsils– actually, Greg soon WON’T have his tonsils, seeing as that is the general idea behind a “tonsillectomy.” But since that tonsillectomy will keep Oden out of the entire Summer League, the question begs, what does this “injury” mean for Oden and the Trail-Blazers?

Well, for starters, it means that Oden will be doped-up on Percocet eating ice-cream in a hospital for two days. Just a necessary expository image I needed to put out there…

But secondly, and more importantly as it actually pertains to basketball, Oden’s tonsil-injury/ectomy means he won’t get the chance to develop his game in this year’s NBA Summer League. And judging from his woeful 6 point, 2 rebound, 10 foul performance in Portland’s opener against Boston, his game could use that developing time.Oden appeared sluggish, confused, lost, and tired in his opening NBA Game—he was even so spastic in the initial minutes that he was simply yanked off the floor. Things didn’t get much better afterwards, as Big Greg became just the third player to foul-out of an NBA Summer League Game.But in that same game, Oden still brought his superior 7’0, 250 pound frame on the court, swatted a shot halfway across the arena, yanked down an offensive board over four defenders, and nearly shook the whole arena with a slam… and in doing all that, still validated to anyone watching why Portland selected him #1. In a word, fearsome.

But now, apparently due to some oversized tonsils, we must wait to see any more of Greg Oden this summer. (I did hear ESPN was televising the event, though: “Tonsil Takeout Tuesday!”)

Does this setback substantiate Portland’s major apprehension that Big Greg is injury-prone? I don’t know. I’d need to be a medical expert, not a basketball writer, to answer that one. But Oden obviously needs to time to develop, and in missing the Summer League, he is missing a great opportunity to do that.

Portland officials said that Oden’s swollen tonsils were affecting his breathing, and thus his stamina. But Oden wasn’t so convinced:

“There’s no excuses, because I was out there playing,” Oden said. “And if I’m playing, I’m playing, so if I have a bad game, it’s not on my tonsils, it’s on me.”

The Trail-Blazers clearly aren’t taking any chances. They’re just protecting their franchise. Even it means shutting down his Summer League development and taking his tonsils out.