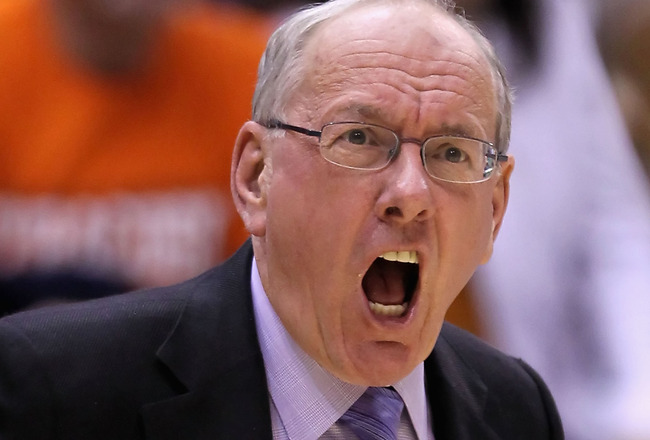 The NCAA pummeled Syracuse hoops today. As a result of infractions over the last eight years, the team will be forced to vacate 108 wins, and it will also lose three scholarships a year for four years. Orange head coach Jim Boeheim also will not be allowed to coach in the first nine conference games next year. With the vacated wins, Boeheim will go from 966 career wins to 858.

The NCAA today ordered Syracuse basketball coach Jim Boeheim suspended for nine games as a result of multiple infractions over the past eight years.

SU basketball and football were both placed on five years’ probation, according to the 94-page report.

The NCAA ordered SU basketball to lose three scholarships a year for four years, or 12 total, the NCAA ruled.

The NCAA ordered Syracuse to return to the NCAA all money it has received from the former Big East Conference revenue-sharing for its appearances in the 2011, 2012 and 2013 NCAA basketball tournament

The NCAA, in a news release, criticized Boeheim not keeping control of his program.

“During the 10-year period of violations, the head basketball coach did not promote an atmosphere of compliance within his program and did not monitor the activities of those who reported to him as they related to academics and booster involvement,” the release said.