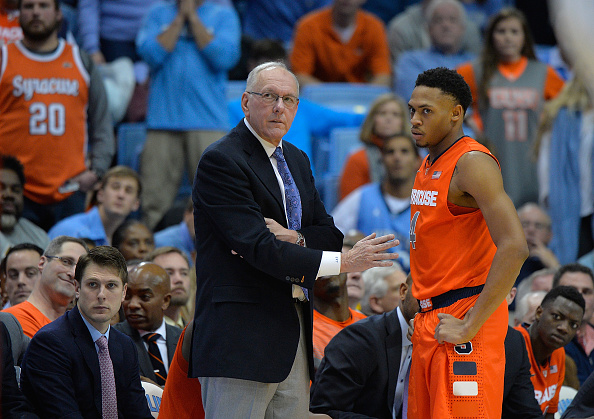 The Jim Boeheim era at Syracuse is coming to an end…in a few years. In a surprising announcement today, Syracuse chancellor Kent Syverud announced that Boeheim plans on retiring in three years, when the coach would be 73 years old. Syverud also announced that the school’s athletic director—Daryl Gross—will take another position at the school. Boeheim is a Syracuse alumnus, was an assistant coach from 1969-76 and has been the school’s head coach since the start of the 1976-77 season. In 39 years at the helm, Boeheim has racked up an 858-333 record with one national championship.

Syracuse men’s basketball coach Jim Boeheim will retire in three years and athletic director Daryl Gross has resigned to take another position at the school in the wake of harsh NCAA sanctions levied against the university earlier this month.

The school also announced that it will appeal certain portions of the NCAA’s penalties.

Syracuse chancellor Kent Syverud issued a statement to the university community notifying it of the news Wednesday.

“Coach Boeheim has also told me that he intends to retire as Head Coach in three years,” Syverud said. “His goal in making this decision and announcement now is to bring certainty to the team and program in the coming years, and enable and plan for a successful, longer-term transition in coaching leadership. Coach Boeheim’s commitment to ensuring that the men’s basketball program remains strong even after his tenure is just one more example of his deep loyalty to our University.”