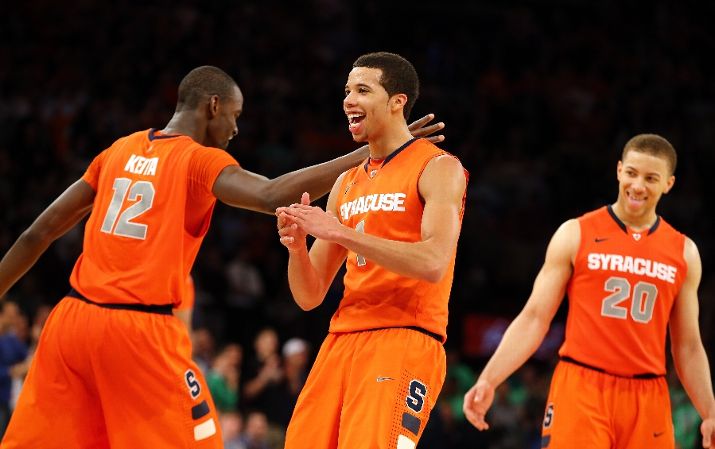 Syracuse and Louisville advanced to the Big East Tournament Final with wins on Friday night at Madison Square Garden. The winner of Saturday night’s Championship game will be the Tournament’s final winner—at least in the current format, as many traditional Big East teams, like Syracuse, Pittsburgh, Louisville are headed elsewhere next season.

In the early game, the No. 19 Orange outlasted the No. 5 Hoyas, 58-55 in overtime, in what will go down as the rivals’ final meeting in the Big East. (“It’s a shame that they’re heading out to Tobacco road for a few dollars more,” Hoyas head man John Thompson III said post-game.) Georgetown fought back from down 12 to force overtime, but Syracuse’s Brandon Triche scored the go-ahead bucket early in the extra period and the ‘Cuse held on from there.

After the game, Orange head coach Jim Boeheim praised Georgetown’s Otto Porter, calling him “the best all-around player I’ve seen in this league”—as in, the Big East, ever. But it’s Syracuse that moves on, after holding OP to 12 points on 4-13 shooting, and getting 13 points apiece from Triche, James Southerland (4 threes) and big man Baye Keita.

Syracuse will meet the No. 4 Louisville Cardinals, who beat No. 24 Notre Dame in the late game, 69-57. The Cards were led by—who else—their dynamic backcourt of Peyton Siva (12 points, 7 steals, 6 assists) and Russ Smith (20 points, 6 dimes) and a beastly night on the boards from Gorgui Dieng (12 boards, 4 blocks). The Ville held the Fighting Irish to just 37 percent field goal shooting.