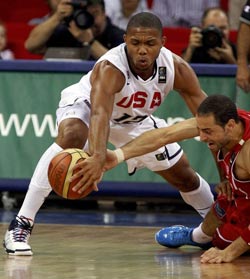 Team USA capped its Group B play with an easy 92-57 win over Tunisia today. The bench clocked most of the minutes and still made its opponent look like a practice squad. Eric Gordon (21 points) and Russell Westbrook (14 points) led the charge. For the complete box score, head over to ESPN.

And now, we’ll quickly hand it over to the AP, for a clean-cut review of America’s gimme game:

Eric Gordon scored 21 points and the United States pulled away after a sluggish first half to beat Tunisia 92-57 on Thursday in its final game of pool play at the world championship.

With nothing to play for, the Americans sleepwalked through most of the early start, leading the winless team by only four points early in the third quarter before turning it into a rout over the final 15 minutes.

The top seed from Group B, the United States (5-0) was awaiting the loser of the Australia-Angola matchup, which would be its opponent Monday as the No. 4 seed from Group A.