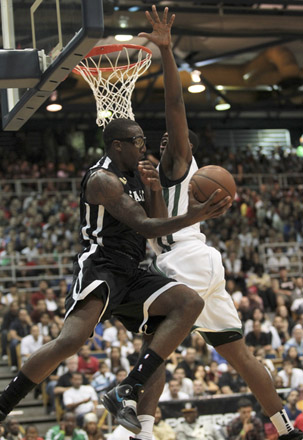 It featured two rosters filled with NBA players, bleachers overflowing with screaming fans, close to an hour of intense basketball action, an overtime session and a down-to-the-wire finish, yet Saturday night’s South Florida All-Star Classic at Florida International University’s US Century Bank Arena bared only few similarities to your average NBA tilt. For one, the squads were entitled Team LeBron and Team Wade, each after its respective superstar captain. For two, the proceeds raised from ticket sales went to Mary’s Court Foundation, a charity founded by current FIU Head Coach Isiah Thomas and his wife that supports public education in Chicago. For three, comedian Kevin Hart coached Team Wade, even attempting his best Bobby Knight impression by launching a folding chair onto the court after a blown call.

Oh, and no NBA games outside of the actual All-Star Game ever includes this many All-Stars. Not a one.

Team Wade, led by the Heat guard alongside Carmelo Anthony, Chris Paul and Amar’e Stoudemire, squeaked out the overtime victory minutes after Anthony drilled a deep three to tie things up with two seconds remaining in regulation. LeBron James, clad in the Nike LeBron 9 “Cannons” and leading a group that included Kevin Durant, Chris Bosh and Rajon Rondo, planted his feet and sank a halfcourt set shot as the OT buzzer sounded, and although the in-arena commentator claimed that his trey should have counted for four (and if any shot ever should’ve, it was this one), it did not, and Team LeBron fell by a single point, 141-140.

For three quarters the game wasn’t unlike most of this summer’s other lighthearted charity games, filled with high-flying dunks, absurdly athletic alley-oops and spontaneous, deep three-pointers. Though just about everyone got in on the fun at some point or another, highlight leaders included John Wall (for Team Wade), Stoudemire, Durant and James. NBAers Russell Westbrook, Rudy Gay, Mario Chalmers, Dorell Wright, Caron Butler, Jamal Crawford, Jonny Flynn and Damon Jones—the only participant without an NBA affiliation—all saw solid time on the court.

But in the fourth, the competition became heated, with both sides unexpectedly clamping down on D and hustling for loose balls. During one crucial play, a chant of “DE-FENSE” broke out, which must have been a charity game first. When Anthony sank the three that forced overtime, he yelled “I do this!” while excitedly hopping down the floor—as he’s done in the past—his unrestrained excitement indicating the kind of natural, hoops-inspired passion generally reserved for moments that affect standings or playoff positioning.

The “oohs” and “ahhs” rained down from the standing-room-only crowd of 4,000-plus for the event’s entirety, and while there was no telling if fans would get the chance to see any of their heroes wearing the uniforms they get paid to play in during the coming months, for this night concerns about lockouts and BRIs and labor negotiations were shoved aside in favor of a legitimate, real-life athletic contest. Those Basketball Never Stops shirts tell no lies.