“The best young sportswriter in America.” 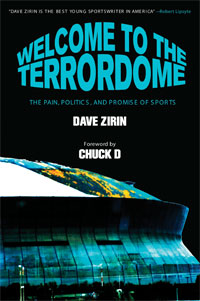 With nothing remotely inspired to say about the Spurzzzzzzz today (has any franchise, in any sport, played more predictable games then them?), I wanted to take this opportunity to plug our man Dave Zirin’s recently released book, Welcome to the Terrordome: The Pain, Politics, and Promise of Sports. If you are a regular reader of SLAM, you should be familiar with Dave, as he writes the “Louder Than a Bomb” column every issue. However, because not all SLAM readers visit our site and not all Slamonline readers buy the magazine, there is still a chance you don’t know who Dave is. I’m hoping to change that.

In short, its my opinion that Dave Zirin combines sports analysis with political and social insights better than any writer I’ve ever read. I feel confident I know as much about sports as Dave does, and maybe close to as much about the world we live in, but I could never combine my thoughts as eloquently as Dave does. Whether its his writing skill, his breadth of research, his sense of humor or even just having the self-confidence to state his true feelings in a public forum, Dave is a master of making a point and hammering it home with knowledge and wit. And I’m not the only one who thinks he’s great—the quote above comes from renowned author and New York Times contributor Robert Lipsyte, whose opinion you might consider more valid than mine. I will concede that Dave’s brand of politics might not agree with everyone on this website (some seemed to take fault with Ryan going there yesterday), but I still can’t imagine anyone who likes sports not respecting what Dave does.

Dave probably deserved a shout out like this when he started writing for SLAM almost two years ago, but it was made clearer to me in the last month when I twice got to see Dave do his thing in person, which is even more powerful than reading one of his columns. A couple of Sundays ago, Dave served as the guest host of Chuck D’s Air America show, On the Real, (Chuck and Dave have known each other for a few years now, and Chuck wrote the forward in the new book…yet another reason for y’all to read it). Dave had me on the show from live in the studio, and it was awesome to see him run the show. Before he had me on, Dave’s guests included Etan Thomas, former SLAM editor Scoop Jackson and Baltimore-based MC Son of Nun, who ripped up the studio with his politically charged verses. Dave did a great job engaging with the guests, asking interesting questions but also letting them speak. Etan and Dave discussed the Black Athlete Forum at Morehouse College, while Scoop was mostly breaking down the dramatics of Floyd Mayweather’s life. He saved the Playoff talk for yours truly, giving me the chance to pick the Spurs to win it all…nothing to be proud of since I’d been so positive about the Mavs in print.

Then, last week Dave and Chuck spoke at the Schomburg Center for Research in Black Culture. As I have quickly learned is typical of Dave, the topics he addressed ran the gamut, from the book-cover New Orleans Superdome (“packed with people after Hurricane Katrina who couldn’t have afforded a ticket to get in there for a Saints game”) to Pat Tillman (“used by the NFL and the US Government to sell the war,”), while Chuck addressed his childhood as a sports fan and how he learned a lot about the world as a teen while listening to the “thinly veiled racists who called in to New York sports radio shows.”

Whether it’s in person, on the radio or in print, Dave brilliantly takes sports and puts them in a larger context. By no means do I think this should be done by everyone in the sports media, or all the time (I work for SLAM, where we celebrate the game, so obviously I’d be a hypocrite if I thought those who focus merely on the game were wrong). But by the same token, how many people do we need pushing the same drivel about last night’s game, or worse, columnists and commentators who get off on negative analysts of the otherworldly athletes in our midst, as if they could ever do better? There’s enough injustice in this world for their to be a thousand Dave Zirins. At the moment, there’s only one, and I’m at least glad he’s down with us.