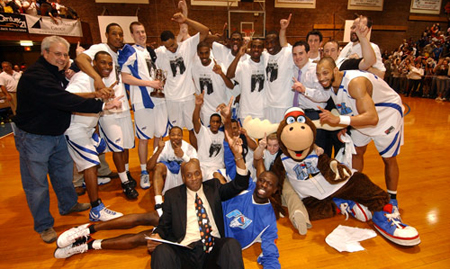 While the ABA isn’t nearly perfect, it has come a long way. With just a few days left before opening night, it seems like every team in the league has a place to play, which is a big improvement from previous seasons. With the rising cost of seating in the in NBA arenas, it should be appealing to peep an honest two hours of basketball that you won’t have to skip lunch for a week to pay for. Without futher delay, SLAM presents 17 reasons the ABA is worth checking out.

–In Vermont, the defending Champion Forst Heaves, owned by Sports Illustrated writer Alexander Wolff, are the New York Yankees of the ABA. Look for them to play tough games all season against a promising new rival, the Manchester Mill Rats. The New Hampshire based team will play their inaugural season at Souter New Hampshire University. They beat the Forst Heaves 97-92 in their first ever (pre-season) game in October.

–In Flordia, the Orlando Aces signed Dennis “Spyda” Chism for AND1 and Ball4Real fame. Down in the ATL, Former NBA 3-Point gunner, Dennis Scott is the general manager of the Atlanta Vision and his team features AND1 and Ball4Real star Robert “50” Martin. Also, AND1 guard Cardell “Ballaholic” Butler of the San Diego Wildcats, who is one of the ABA’s most outstanding players. And the owner of the recently formed Los Angeles Push says he has signed Larry “The Bone Collector” Williams and Robin “Sik Wit it” Kennedy, both are storied streetball legends. So if you’re into streetball, the ABA presents you with the unique opportunity of being able to watch these guys play under their government names.

–In Westchester, NY, Elton Brand’s mother and half-brother will operate the Westchester Phantoms, who are coached by WNBA legend Teresa Weatherspoon.

–In Canada, the ABA is working to restore the domestic rivalries lost when the Vancover Grizzlies moved to Memphis. The Montreal Royal, Halifax Rainmen and the Quebec Kebekwa represent Canada in the ABA.

–The ABA has several international teams. The ABA acts as the host-league for international clubs who are operating in the states. In fact, the Los Angeles Lakers selected Bejing Olympian guard Sun Yue with the 40th overall pick in the 2007 NBA draft. The Beijing club has been in the ABA since 2005 playing in Los Angeles. Other foreign franchises competing in the ABA are the Bahama All Pro Show, an awflly named team stationed in Miami and the Cicero Cometas, a team that was originally in Mexico’s pro league the LNBP.

–In Houston, TX, 81-year-old local legend, Howard Judah, is ready to begin his second season playing for the Houston Takers, formerly known as the Houston Understakers.

–In Boston, the newly formed Boston Blizzard will compete with the newly awesome Boston Celtics and all the college basketball a city could hold for attendance. The Blizzard’s only advantage is that SLAM’s own Ben Collins has signed on to do their radio play-by-play.

–Because the ABA “3-D” rule (which states that afer a made basket, if the defensive team forces a turnover in the backcourt, and converts the turnover into a basket, that basket will be worth three points) really isn’t such a terrible idea.

–In Macon, GA, the Georgia Grizzlies have signed Behdad Sami, the only professional basketball player of Iranian decent in the United States. In a time of war, maybe the orange ball can serve as a common ground.

–Because ABA CEO Joe Newman believes more than anything that his league will survive. Ask him yourself: [email protected]

–Because this reporter (a lifelong New Yorker) had never heard of any “Corning, NY” until the ABA introduced the Corning Bulldogs for the 2007-2008 season. (Geographical note: Corning, NY is two hours south of Rochester and three hours southeast of Buffalo.)

–Because PONY is now the official sneaker of the ABA and David Thompson rocked them in the original ABA. Enough said.

–Because when players like Tim Hardaway, Dennis Rodman, Lawrence Moten, Cedric Ceballos, Master P, Randy “White Chocolate” Gill, Sun Ming Ming and James “Hollywood” Robinson are to jump-on ABA rosters, ABA games can look more like a direct to DVD cast list. But if it’s the entertaining competition that matters to you, then the ABA, when done right, is worth trying out.
–Because actual ABA games are almost as entertaining as “Breaking News from the ABA” in the HYPE section of our magazine.

MADE IN THE ABA
Critics have always picked a bone with the ABA over it’s constant fluctuation. While many franchises should have never been allowed to play, other teams take advantage of the ABA’s affordable entry fees, develop a fan base, and jump to another league. Here is a pretty accurate list of teams that were formed in the ABA and built strong enough organizations to move to other leagues.

ABA to NBA
Here is a list of current NBA players who have played in the modern ABA.