The Celtics worst year gets even worse. 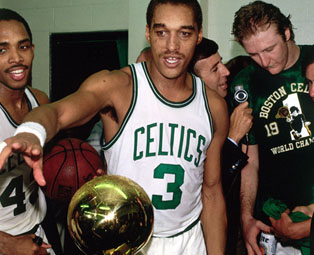 Dennis Johnson, the MVP of the 1979 NBA Finals with the Sonics and a two-time champion with the Larry Bird-led Celtics, died today at the age of 52.

Currently serving as the coach of the NBDL Austin Toros, DJ was a five-time All-Star and a former head coach of the L.A. Clippers.

I never had much interaction with DJ—the last time I saw him was in L.A. last year when I was working on a Chris Kaman feature—but feel nothing but sadness for his family as well as Celtic fans everywhere.

It does bear noting that, in the 25th Anniversary year of the Nike Air Force 1, that DJ perhaps got the best-ever special makeups—all-green hightops with a white Swoosh. You can sort of see them in the photo. Bobbito LOVED those joints.