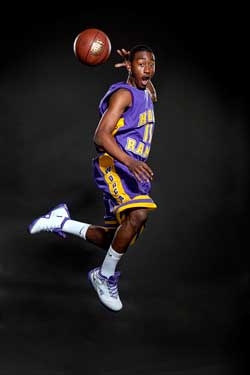 With Ricky Rubio and Brandon Jennings, this makes sense. Teenage pro phenoms, one an Olympian, the other a trailblazer (not literally, I hope—that would take “Pritch-slapped” to a new level), playing major roles on top European squads, blah blah blah. Yeah, SLAM is bold, cutting edge, whatever—but knowledgeable basketball fans in general won’t be shocked. Even the most devout high school hoops observers, however, couldn’t have predicted they’d see John Wall and Lance Stephenson on a cover. Not at this point, anyway.

Well, maybe Lance. He is from Coney Island, after all (third time’s the charm?), and graced this publication’s pages as a precocious point-producing phenom before he started the 10th grade. That was after he already took home a NYC PSAL (Public School Athletic League) title (the first of four consecutive; what up, Franklyn), after he faced off with then-rising senior OJ Mayo at ABCD Camp before he entered high school and after he was already a regular playing with and against grown men at the Rucker.

On the other hand, it was before the BK native’s well-publicized (blown out of proportion) off-court incidents, before he was (in)famously cut from the USA Under-18 National Team last summer, before his bornready.tv online documentary (which just moved onto real TV earlier this week) and before most talent evaluators (not this one) dropped him from the top spot in their rankings. Basically, people got tired of Lance Stephenson.

John Wall, though? That’s another story. A lot of casual observers of the prep scene have never even seen him play. Up until about two years ago, even the most ardent national scouts barely knew the kid’s name. So how did a skinny, unknown kid from Raleigh emerge as the most talked-about prospect in the nation? I feel almost privileged to explain his rise to stardom, as I was an eyewitness.

It started in Chicago, back in June of ’07. Reebok held a tryout camp for lesser-known players and underclassmen to battle for the opportunity to be selected to their invite-only camp in Philly. Wall stole the show in the Chi, then repeated his performance with an encore at the big show a month later, alongside names like the aforementioned Jennings.

His unbelievable athleticism and mind-blowing were the attributes that immediately stuck out, but since then, he’s continued to hone his game. Last summer, his stock went through the roof, as he destroyed any and all comers on the AAU and camp circuit, leading many to rank him as the nation’s top prospect.

I last saw Wall play over the holidays in Florida, and his development was remarkable to me. Tighter ballhandling, an improved J (albeit streaky; still a work in progress, but it was non-existent before), even better playmaking ability and most importantly, newfound leadership skills are what caught my eye. Wall has transformed from a monster athlete into a real ballplayer, and possibly a future All-Star NBA point guard, to boot. The tools were always there, but these days, the production is starting to match the potential.

As for Lance, don’t believe the hate. “Born Ready” still dominates at will (ask the West squad about his second-half performance in Wednesday night’s McDonald’s Game; don’t get me started on why Wall wasn’t in it, or, for that matter, why Lance won’t be in the Jordan game in his hometown, in which Wall will participate), but, in my opinion, not enough people are noticing. Sure, they see the stats—as well as the four city chips, two state crowns and the all-time New York state scoring record—but all you hear is negativity. Remind you of anybody else’s prep career? A certain rookie on the Grizzlies, perhaps? Think about it. Both born scorers. Both nationally known since before the ninth grade. Both heavily criticized for on and off the court issues. Both determined as hell to succeed.

And despite his lack of hype prior to this point, that goes for Wall, too. I could go on and on about their individual games, but I’ve always been a proof-is-in-the-pudding type of dude and I’m pretty damn confident that in two years (if you think them killing their respective one-and-done years isn’t a foregone conclusion, you’re probably on the wrong site), these two will show and prove as NBA rookies. I’m not saying they’ll be better than OJ and Derrick Rose. But if comparisons aren’t being made, I’ll be very surprised. So, international intrigue aside (and believe me, I’m sold on Ricky and Brandon, too), these two homegrown and domestically-developed guards have a chance to be very special for years to come. Just don’t say you weren’t warned…