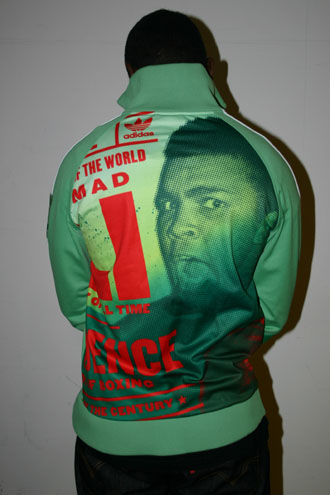 “I am Muhammad Ali, a free name – Muhammad means ‘worthy of praise’ and Ali means ‘most high’- and I insist people use it when speaking to me and of me”. Worthy of praise, most high are only the tip of the iceberg when referring to Muhammad Ali. Some may think of the words respect, courage, dedication, giving, spirituality, conviction and if you have more adjectives to throw in the mix, chances are you still haven’t got it all covered. We are talking about a man who broke barriers, made sacrifices time after time after time for what he believed, and always said what was on his mind even if his PR agent told him not to. Truly one of a kind, something athletes today only dream about becoming. In my opinion Shaq is the closest personality to Ali today and he doesn’t come within miles of Ali’s greatness.

Is Adidas of the most high? Are they worthy of praise?

I wouldn’t go that far but they sure as hell came close. Adidas new line of Ali’s values track jackets and kicks set the racks at Macy’s on fire this July when the first of six jackets dropped.

Six of the world’s greatest artist were summoned and assigned one of Ali’s values. Leroy Nieman, a long time friend and personal artist of Ali had some words to share about the champ when I spoke to him. “It’s was easy to do this, I’ve known Ali since he was 21. He’s such a great guy. I remember every time he saw a woman with me he would say to her ‘aww come on, you could do better.’ It’s great to honor him like this”. Through his art, Nieman has explored contemporary leisure, all the pastimes and places people enjoy, and particularly the world of sports and the world of entertainment. Nieman has brought art into the lives of more people than most post-war American artists put together and now he gives us another addition to Ali’s legacy. Personally Leroy’s jacket is my favorite. It feels like something I should have on a wall. When I first viewed the line in May at the Adidas Fall ’07 preview, I was immediately in love with the royal purple and the brush stroke piping. It’s like that jacket was made from 1/4 fly-ness, 1/2greatness and 1/4 longevity. I see this as the one of the hotter items that came out this year; it’s not very trendy so you can wear it years from now.

The second jacket has a completely different feel, designed by Cey Adams, if you are not familiar with the name allow me to expound.

Run DMC, in collaboration with Adidas in ’86… Cey Adams. Every album design, tour backdrop, artist logo, and flyer from ’86-’99 released by Def Jam… Cey Adams. Dude’s got history! Eric B, Rakim, LL cool J, Run DMC anybody of that era who was doing their thing, he was on it. After all that history he still is humble enough to say “Man I was real excited to do this. This generation knows of Ali but they don’t know Ali and what he meant to people. So for me, I’m just a regular guy, to honor him I was very excited.” The founder of the Drawing Board (Def Jam’s former in-house design firm) took the graphic art approach in his display of courage. The sea foam green is a great look but more important the message that the jacket expresses. Among other things Ali was known for his untameable mouth and his stance on social and political issues, standing up for what he believed in, and not what he thought was good publicity. Adams captures that in the display of a flyer for the fight of the decade “Ali VS. Courage”.

There are four more on the way I enjoy them all and think that this is best Ali Line done so far. Lord knows many have tried and come up short but I think Adidas has finally figured out the formula for the idolization of Ali.

See the matching Kicks exclusively in our new KICKS issue with MJ on the cover.