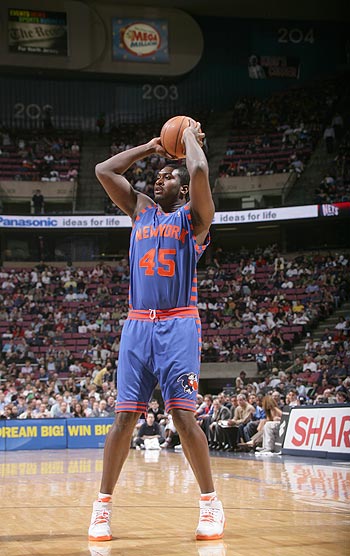 I got an email at about 9 p.m. on Friday from a friend who doesn’t use capital letters.

“I heard a couple of rumors from some reliable sources that the Spurs may be practicing here on Monday,” he said.
“This would be HUGE.”

By “here” he meant my building, which has a gym at the bottom of it, and by “reliable sources” he probably meant some security guards he overheard while zipping up his coat on his way to 7-11, but I didn’t care.

The Spurs were going to be in my building. One of the best teams of this short century will be viewable un-showered in my pajamas.

I’m going to be able to study TD’s jumpshot, see if Manu actually practices flopping and smarmily whisper to friends that I’m probably better than Matt Bonner. I was going to do covert ops for my Mavs and pretend like I remember their inbounds plays. I was going to pray, against all hope, that Eva Longoria is bored enough to go to away game shootarounds.

Well, at the very least, I was going to fill up a notebook for SLAM. I dropped by downstairs this morning after I’d gotten a coffee and my favorite overdramatic security guards were buzzing.

“Twelve, 12:30, I heard,” they screamed overexcitedly. They were fighting over shifts. “They’re coming!”

This was their Super Bowl. A building that houses Division 3 basketball bringing in the Spurs is like Denzel visiting K-Fed’s house; they’re going to have to clean this place up a bit.

I could picture it: noon strikes. The security guards roll out a red carpet. Party hats and poppers. Maybe some streamers and a five-foot wide, post-practice cheese platter. Minus the confetti, this is how the Mavs do it at home.

Lots of caution tape everywhere, I think, I’d have to sneak around and find a media guy and tell them that I have work to do. I have to watch Tim Duncan shoot free throws. I have to fill out a notebook. I have to challenge Matt Bonner to a game of HORSE.

This might take a collared shirt. PJ plan aborted.

Noon actually strikes: no party hats. Not even party kazoos. Lots of smoke, no fire. No cheese plate (I forgot that Cubes spoils my Mavs at home).

No bus. I’d kept an eye out, but there was no sign of an actual team. Friends were still going to pester and lurk around the gym, but if I wanted interviews so badly as to annoy the poor guys I would’ve just asked for a press pass or gotten therapy.

Around 2:30, a friend pounds on my door. He almost owes me a new lock.

“DID YOU SEE THAT?” he screams.

Wait, what? Manu showed up and tried to catch a bullet with his teeth? Eva is here? He beat me to the Matt Bonner game of HORSE?
“Jackie Butler was in the gym shooting jumpers!”

How can that possibly be awesome?

If you learn anything from watching Jackie Butler’s jumpshot, it’s that you now know what a dying seal looks like in person. I’m not trying to get this guy cut or anything, but this guy shouldn’t be three feet away from a basketball hoop if he’s food shopping. I didn’t even bother to run downstairs with a notebook.

I really wish this story had an ending.
That’s been my morning. TOP-10 Rankings tonight.