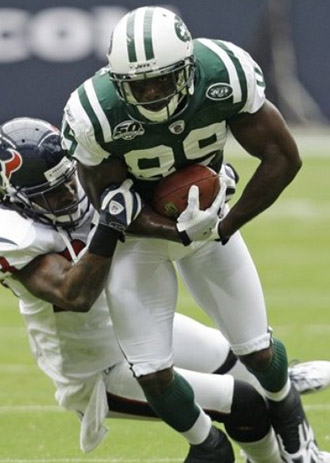 Jerricho Cotchery knew the answer, but he asked anyway.

It wasn’t a malicious question, though. With Cotchery, never that.

Unlike many NFL wide receivers, JC’s calm, quiet, subdued. Think Terrell Brandon, not Terrell Owens. There’s not a whiff of an ego to be sniffed. He’s so humble and all about his business, that when Cotchery celebrated after catching a TD pass early last season, Greg Bishop was surprised enough to include it in a NY Times profile.

Back to our game of H.O.R.S.E. at the Reebok Sports Club in Midtown Manhattan, Jerricho coolly rubbed in his three-letter lead.

“You ready for this?” JC asked, squaring up from 25-feet.

“Don’t let me heat up,” I joked, chasing down the board.

After his miss, it was now S on my end to O on his.

I bucketed a baseline J from a step inside the arc.

“Must be the ZigTechs,” I offer, teeming with false modesty.

More laughter. For a man who’s experienced so much tragedy—from the death and incarceration of close friends to the death of one of his 12 siblings—it’s surprising that he laughs so easily. But it’s a pleasant surprise. Laugh hasn’t beat Cotchery down.

We went back and forth for a few shots, me hitting and talking smack, him hitting and smiling quietly.

We went back and forth for a few more shots, me missing and bowing my head, him missing and encouraging me.

Yeah, it was pretty obvious: JC would make one hell of a teammate. It was also clear that he could play a little hoops.

After a few minutes of sparring at S to R, I tied it up at S on a midrange J.

More compliments from Cotchery, all while in the midst of dropping a large lead— and the kind words didn’t even feel fake or forced.

A few minutes later, I completed the comeback, knocking JC out with a college three.

At breakfast, 30 minutes after our little game, over a bowl of strawberries and melon, Jerricho and I talked about AAU ball, the upcoming NFL season and the origins of his name. In between my Qs, JC interrupted me a few times, complimenting me again on my nice comeback.

Jerricho’s always nice and always polite; that much I’m sure of. I’m not fully convinced, though, that he didn’t let me win, knowing the game meant more to me than he.

By all accounts, that’s just the sort of thing he’d do. Either way, I’ll take the W.

I warned you not to let me heat up, JC.

SLAM: SO I HEARD YOU PLAYED A LITTLE AAU BALL GROWING UP.
Jerricho Cotchery: I’m from Birmingham, Alabama, The AAU team I played on when I was growing up was the Alabama Ice. We had guys, Gerald Wallace was on that squad, Karlos Dansby who’s now on the Miami Dolphins, Mario Austin who got drafted to the Chicago Bulls—now he’s over in Europe playing. But we had a number of guys on the team, and we did pretty well every year.

SLAM: WHAT SPOT ON THE COURT DID YOU PLAY?
JC: I played combo-guard. Mostly I ran the two, and had a lot fun.

SLAM: WHAT YEAR’S DID YOU PLAY AAU WITH THOSE GUYS?
JC: Yeah, we played together from age 13 all the way up to 17.

SLAM: YOU THINK PLAYING HOOPS HELPED DEVELOP YOUR FOOTBALL GAME?
JC: No doubt. Basketball is a different kind of conditioning. In football, you know, you do a play, you run a play, then you have a time to go back to the huddle, catch your breath, and then you run another play, unless you’re running the run-and-shoot or something like that. But basketball is constantly running up and down, so I was in great shape at the time it came around to football, because in high school I played both ways in football, cornerback and wide receiver. It helped me out a lot being able to go both ways. But being able to be agile on the court, move, move laterally, fast, forward, all of those things help out.

SLAM: SO DID YOU CHOOSE FOOTBALL OVER HOOPS, OR DID FOOTBALL KIND OF CHOOSE YOU?
JC: Well yeah, football—the funny story is—I wasn’t even gonna play football in high school. I had just kinda played it my entire life, and once I got to high school, I was just gonna go straight with basketball. I went out for the football team, they convinced me to come out a couple of weeks before the first football game and I ended up playing then. But towards the end of my high school career, football had reached another level, as far as getting offers from so many schools across the nation.

SLAM: TELL ME A LITTLE BIT ABOUT BALL PLAYERS IN THE NFL…ANYBODY REAL NICE AT HOOPS?
JC: As far as basketball, we have a lot of guys on our team that can hoop. Well Kerry [Rhodes] got traded to Arizona, but I played against him in high school, and he can really ball. Darrelle Revis, he can get after it. He has a similar game to Rodney Stuckey in Detroit. I’m not saying he’s Rodney Stuckey, but yeah, similar games. He can really get after it, I actually have a cousin that’s on the team, Marcus Henry—he was on the practice squad last year—he can really get after it. He’s like 6-4, he can handle it and he can really shoot. So it runs in the family. (Laughs).

SLAM: ARE Y’ALL ALLOWED TO PLAY BBALL EVER OR NOT REALLY?
JC: Well, you play at your own risk. That’s what they tell us. But you know, guys don’t go too  hard. You always want to pay with your teammates. Because guys get real competitive with the guys you don’t know, and sometimes, it can get out of control and you end up spraining an ankle and being out for the entire year.

SLAM: YOU STILL WATCH A LOT OF HOOPS?
JC: That’s all I do man. Portland Trail Blazers are my favorite team. Brandon Roy going down hurt us a lot. He’s built nicely, bunch of talent in basketball. College basketball, all the way around.

SLAM: WHO’S YOUR COLLEGE TEAM?
JC: Have to go with NC State. I played [football] at NC State. Hopefully we can get a good recruiting class this year. We’ve got two top, 5-star guys coming in.

SLAM: JULIUS HODGE! DID YOU WATCH HIM PLAY THERE AT ALL?
JC: (Laughs).Yeah, those were the good days. Watchin’ him take over games. He was fun to watch.

SLAM: SO HOW LONG HAVE YOU BEEN DOWN WITH REEBOK?
JC: Since I’ve been in the league, I’ve been with Reebok. And they’ve been a blast to be with. They’ve taken care of me very well. Very supportive of me throug my foundation work, my charity work and it’s just been fun being able to be with Reebok.

SLAM: TALKING FOOTBALL FOR A SECOND: WHAT ARE YOU LOOKING FOR OUT OF THIS COMING SEASON?
JC: Our goal is to win the Super Bowl. And that’s something we really believe we can do. Last year a lot of people were laughing at that, but we came 30 minutes from going to the Super Bowl. Now people realize that it’s an attainable goal for us. But we’re going into this year with the same goals. We’ve made a lot of great additions and now it’s just time for us to continue to work hard and put it all together.

SLAM: YOU GUYS LOST RB THOMAS JONES AND PICKED UP WR SANTONIO HOLMES, YOU THINK THE JETS ARE GONNA GO TO THE PASS MORE THIS SEASON?
JC: Well, it would allow us to be more balanced. I think you can’t abandon the run. You have to be able to run the ball to survive in this league. At some point it will come back to haunt you if you don’t run the ball successfully. You can maybe get through the regular season and the playoffs as well, but as some point it’s gonna bite you in the rear end. But I think [picking up Holmes] will allow us to be more balanced, and it will be fun.

SLAM: IM’A LET YOU GO, BUT NOT BEFORE I ASK YOU ABOUT YOUR NAME: IS “JERRICHO” BIBLICAL OR FAMILIAL OR WHAT?
JC: My dad…and it’s biblical. I’m actually the third one with that name. My dad is the second Jericho, but he wasn’t named after his father. He was named after his uncle. My grandmother used the name for him, and it was used it for me.