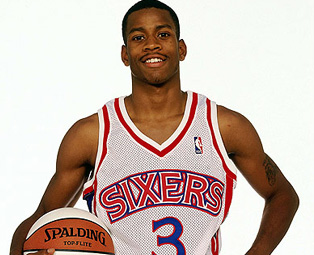 Jim Gray is back-pedaling like crazy, saying maybe he did talk to AI after all even though he had to go on the air and apologize and say he hadn’t spoken to AI after he went on the air and said he’d spoken to AI. Got all that? ….. This guy thinks the Knicks should get Iverson. That’s an amazing column ….. In Boston, they’re throwing Jefferson, Telfair, and Delonte out there ….. Mark Cuban says the Mavericks aren’t involved ….. Barkley says the Sixers should’ve done this months ago and manages to state the obvious in an entertaining way ….. The Hornets say they’re not involved ….. Popovich says count the Spurs out ….. Would the Kings move Mike Bibby for AI? ….. Phil Jackson won’t say the Lakers aren’t interested, if that makes sense …..

My favorite part of any of this is Stephen A. Smith writing: “Today, the primary concern should be preventing Iverson from becoming Charles Barkley, Part II, making sure the Sixers don’t let go of their latest mercurial star for a bag of cheap beans thrown in the trash after Thanksgiving.”

What does that mean? I have no idea, but it’s beautiful. And like Stephen A., I hate cheap beans, too.

(There’s also some weird random notes at the end of his column that somehow made it onto the site. I don’t think it’s Smith’s story notes because the names are all spelled out, and when you’re taking notes you probably wouldn’t take the time to do that. Still…weird.)

So where does Iverson end up? Honestly, I have no idea. I haven’t heard anything solid, and as I noted in my SI.com column today, the thing you can’t gauge here is logic, because Billy King is involved. But we’re going to stay all over this story.

“They’re not a very good team. They should have known this team was not going to be very good. They didn’t make the playoffs last year, and they were just going to be a year older. What did they think was going to happen?… This is not rocket science. It’s very simple.” — Charles Barkley, on the Sixers.

THE LINKS…
• How do you spell All-Star? EDDY CURRY! We need to start the movement, right here on SLAMonline!

• Good stuff from Vinny Malozzi, an occasional SLAM contributor and NY Times writer who played in an ABA game.

• Drew Gooden is listed as day-to-day after straining his groin attempting a dunk in warmups.

• A very question is raised here: What the heck happened to Stan Van Gundy? And why won’t the Heat allow him to talk to the media?

• Peter Vecsey chooses to write a wildly positive piece on Zach Randolph, which seems strange for The Viper because Zebo is the kind of guy who he would usually have a field day going after.

• Next thing you know, Vecsey’s going to be raving about Steven “Whoo!” Jackson, who was suspended for one game for a confrontation with Rick Carlisle.

• Shawn Marion loves him some cartoons. And what’s amazing about the Suns to me is that after that double OT win at Jersey, they went to Boston and won and then blew out the BETcats in Charlotte. That’s ten straight for the Suns.

• Interesting article on the theory behind NBA shootarounds, which are by all accounts as boring as the eponymous ESPN show.

• Marvin Williams returned from injury to start for Atlanta and was tossed by Steve Javie.

• Note at the end here says Joey Crawford suffered a knee injury in a game over the weekend.