The Links: Eddy Curry, the Knicks and Hawks…and Iverson 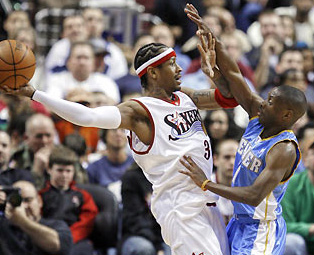 So I went to that Hawks/Knicks game last night at the Garden, but I’m not prepared to write about it today. The Hawks were without Joe Johnson, who is by far the best player on the team, and they played like crap. Mike Woodson had a bad night, too — yeah, coaches can throw out stinkers as well; the Hawks had weird substitutions, they didn’t run any plays for Josh Smith and they really didn’t run many pick and rolls. It was pretty disheartening to watch all the way around.

I am proud, though, that I managed to stay for the entire game, unlike most of the crowd and half of the media. And I survived a late night that involved the bar at the Hawks’ hotel, talk of the best prospects in Europe, NBA gossip and a post-midnight trek to, of all places, the Carnegie Deli.

Funniest line of the night came from one of the Hawks players, who was calling Nate Robinson “Li’l 50,” for his resemblance to Mr. Curtis Jackson. Also, Cedric Bozeman “accidentally” walked into the Knicks City Dancers locker room across the hall from the Hawks locker room.

I did not have a chance to build with our own All-Star candidate Eddy Curry, but suffice to say the man continued to put up All-Star digits in the Knicks win. Curry had his way against pretty much anyone the Hawks ran out there, although the Knicks didn’t exactly seem committed to getting Eddy the ball — he didn’t get a touch through the first 4 minutes of the game. Our All Star finished with 20 points and 9 boards. And the exact second he notched his 20th point in the fourth quarter, Isiah yanked him from the game. Think Isiah wasn’t watching the stat sheet?

Jared Jeffries had a heckuva game, considering his name is “Jared” and all. It’s been funny, because Isiah’s talked about how much Jeffries would add to the team and how much better they’d be with him, and I was thinking, This is the same Jared Jeffries that played for the Wizards, right? And then Jeffries comes out and 7-8 from the floor for 15 points and 7 boards.

His best play of the night, however, came in the second quarter, when he tried to take a charge down low against Josh Smith. Smoove lowered his shoulder and plowed right into Jeffries, who went sprawling back. Bob Delaney whistled a foul on Jeffries. As Smith went to the line, Jeffries, blood dripping from his mouth, went over to talk to Delaney along the sideline. Delaney was explaining why he called the foul on Jeffries, who was agitated and spurting blood all over the place. Finally the Knicks trainer grabbed Jeffries and pulled him off the floor to take him to the locker room and patch him up. And as they left the floor, Jeffries suddenly turned around and slammed his fist into the scorer’s table, and then turned and sprinted off the floor before Delaney could whistle the technical, like a 6-year-old told to go to his room. (His fist landed about four feet from Hawks co-owner Mike Gearon Jr. And the way he swung his arm in a loop, and the spot where it happened was all eerily reminiscient of when Camby swung and popped Van Gundy a few years ago.)
When Jeffries returned, he waited until a timeout and walked over to Delaney, his hand extended, presumably to apologize. I was just hoping Jeffries hadn’t broken his wrist again when he punched on the table.

Blah blah blah Iverson. I mentioned Golden State being a possible destination in my initial AI trade post, and then yesterday I started thinking about Nellie and AI, but moreso about Nellie and trades. Remember how when he was the coach of the Mavs, Dallas used to make about two or three big trades each season? And since Nellie left, things in Dallas have calmed down considerably? People used to chalk up all those moves to Mark Cuban being a maverick and being willing to spend the cash, etcetera, but what if it was Nellie that was driving all that stuff? So wouldn’t he be willing to shake things up with the Warriors?

I’m getting tired of thinking about all this. A few months ago I switched my wallpaper on my laptop to an AI wallpaper — no real reason, just wanted to swtich it up and thought it was a cool picture of AI. But now, every time I open my laptop, there’s AI, staring back at me. I’ve been making calls, trying to figure out if anyone knows anything, but the one thing I keep hearing back is that Billy King is playing this thing very close to the vest. Nobody knows anything, and those who do know something ain’t talking.

One rumor I heard earlier today from two people who know a lot about these things is that Denver is currently the leader in the clubhouse, in a three-way deal with Portland the third team. (David Aldridge has details here.) Sixers fans, you’ll lose AI but gain Jamaal Magloire and Joe Smith. What’s not to be excited about?

QUOTES OF THE DAY…
“I think it would work out with the two of us. I played with the biggest jacker in league history in Antoine Walker, didn’t I? He was just jacking up shots. At least Iverson might go hit them at a higher clip and get to the free throw line.” — Paul Pierce, on the possibility of playing with Iverson.

“I’m sure the first time Bill Gates walked into someone’s office and asked for $50,000, the way he was looking back then, people probably looked at him and said no way. I’d bet we’d all line up and pawn our last watch or ring to give him $50,000 now.” — Sam Mitchell, who apparently has some pricey jewelry.

“We’re still on the same page. There’s no different pages in the book.” — Rasheed Wallace, on the Pistons.

“We cannot let the starters down. That’s why we were brought here. That’s why we get a check every two weeks. You know, you only work three hours out of the day. Other people are working 9 to 5 and getting fractions of what we’re paid daily. I’m a Southern boy — I think about (that). You’ve got to work for your check.” — Mikki Moore.

“C’mon, man. It is impossible. I am not a star. Luol Deng is playing really well. He can be an All-Star. Ben Wallace too. I think everybody. Except Noce.” — Andres Nocioni, on his All-Star prospects.

THE LINKS…
• The Heat called the Sixers to express interest in Iverson, although I think it’s just interest they’ll be expressing. But Shaq, Wade and Iverson would be completely ridiculous. I just wish they’d do a three way deal and put Antoine Walker back on the Celtics ….. Iverson to Boston? Doesn’t sound likely. And Jackie MacMullen is hating.

• If you write one of those NBA power rankings columns and don’t have the Suns number one, you don’t deserve the internet space.

• Sam Smith, in the middle of game notes, puts the Sonics on blast…

Seattle’s offense, a simplistic set of lazy pick-and-rolls and isolations, looked like it was copied from one of those late-night infomercials where the guys don’t get paid enough to afford real uniforms.

• Isiah has figured out how to fix Steph: Magic Johnson. Finally, someone who speaks Stephonics.

• Dirk finished two assists short of his first career triple-double, and he points out that piling up stats isn’t like “PlayStation.”

• Jerry West showed up to speak to the Grizzlies and tell them to get their act together. The Grizz then went out and lost to the Blazers.

• The Cavs have massage therapists and psychiatrists available for their players.