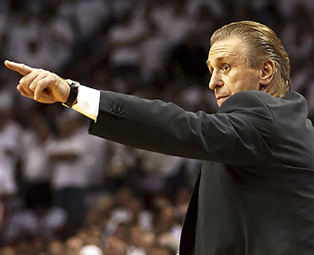 • Right to it: Pat Riley is out. He’s apparently taking a leave of absence from the Heat, though no reasons are giving. Hey, the rest of the Heat players have been taking a break all season, why shouldn’t Riley? I’m sure more on this will be dropping soon.

• Looks like the Philly Inquirer has released David Aldridge, who broke the Allen Iverson trade story for them. Nice. How does the best NBA writer at ESPN and then a paper get let go.

• Not that any of us are invited, but here’s the website for Gilbert Arenas’ birthday party. It’s an incredibly slow-loading site, as if it’s being hosted on Gil’s home computer or something. It’s going down this weekend in D.C. and featuring Puffy, Busta, L’il Wayne, T.I. and The Game. And it’s being sponsored by Vitamin Water. There’s a lot about how this is a private event, but there’s also a lot about where, when and who will be there. Basically, this seems like a recipe for trouble. Hopefully SLAMonline.com columnist Etan Thomas can score an invite and report on it for us.

In related news, the Wiz play the Bucks tonight, and the Wiz aren’t happy with the way the Bucks acted after beating them last week. Maybe the Wiz shouldn’t have lost, then.

• Two weeks ago I was in the Cavs locker room in New Jersey when someone with an impossibly deep voice said from behind me, “Hey, do you work for the Nets?”

I turned and found myself facing Zydrunis Ilgauskas, a.k.a. Zzz. No, I said, I don’t work for the Nets. Why?

Well, maybe I can help you out.

I told Zzz that as far as I knew, the Nets weren’t happy with his attitude so they’d sent him home and told him not to come around, and they weren’t trying to trade him because they were trying to stick it to him.

That changed today, as the Nets traded Jeff McInnis to Charlotte. The BETcats needed help at the point (they’d been using Derek Anderson) and the Nets get under the salary cap and avoid paying luxury tax, but this does nothing to address the Nets getting another big to help with Nenad Krstic gone.

• They brought the leather balls to Orlando last night, but they had too much air in them and had to let out some pressure before the game. Kind of like Rasheed Wallace.

• Peter Vecsey empties out his rolodex for a column. Weird.

• T-Mac’s back may be healed, but now Bonzi’s having back troubles.

• Ben Wallace is barking about playing the Pistons this weekend.

• The Michael Redd All-Star campaign is picking up steam.

• Marvin Williams appears to have made a New Year’s resolution to take charge in Atlanta. Finally.