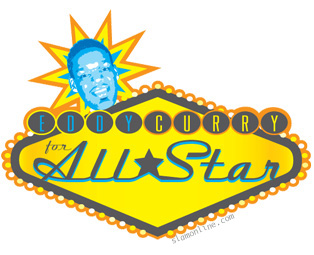 Tonight’s late TNT game will be the Lakers at Sacramento, which probably won’t be that compelling. What will make it worth watching with be Charles Barkley, who will fill in for Steve Kerr and team with Marv Albert, calling the game for the night.

Max Airington made a comment yesterday about Chris Paul appearing on “Rome Is Burning” from his home, with a huge SLAM cover behind him. First person who finds us a screen shot of this gets a fitted SLAM 100 New Era hat.

Anyone notice the Cavs are sitting pretty in first place in the East right now? Every time I read a story about them it’s all about how poorly they’re playing, how their offense is terrible, etc.

Let’s get to The Links. Not much small talk today, I realize. I’m in the midst of a lot of stuff for the next issue of SLAM, which will be very, very cool. That’s all I can tell you right now. You’ll see soon enough…

QUOTES OF THE DAY
“I can’t see back there.” — Donyell Marshall, when asked if his neck was bruised.

“When I got there, it was all like, ‘You’re the best point guard we’ve had since (Jason Kidd) got here.’ But there’s a pecking order in Jersey and if you’re not part of it, Lawrence Frank doesn’t care about you. He had told me out of his mouth that I was going to get big minutes, but he stopped playing me way before I got hurt (knee surgery in January). Then they told me to not come (to camp), which is cool, and they tried to bad(mouth) me…which is easy to do because of the reputation I had. I had a little trouble early in my career and an attitude problem, and people try to hold it against me now, but you ain’t going to read my name in no drama. It’s all perception. People perceive me for how I look. I have tattoos and I have braids, but man, I’m 32 now. I’m grown and matured and happy to be here.” — Jeff McInnis.

“I don’t need to explain that. That’s it. It’s the whole thing. I know the total.” — Bernie Bickerstaff, asked to explain what “the total” Jeff McInnis is.

THE LINKS…
• Pat Riley held a news conference yesterday afternoon to discuss his leave of absence, which he says is due to injury. On his way out the door, he put James Posey and Antoine Walker on warning because their body fat percentages are too high. (According to the Herald, they’re each 1 percentage point above the goal Riley set for them.) Bizarre, all the way around.

• Let’s give it up for NBA.com, which is hosting voting for the first-ever NBA All-Star Dance Team. Vote here. I’m thinking we need a write-in campaign for the USC Song Girl with a wedgie.

• I kind of like the LeBron and Drew routine.

• According to Sam Smith, if you’re an NBA player with “food poisoning,” you’ve probably just got a hangover.

• Newest BETcat Jeff McInnis is in Charlotte and ready to roll. He’ll always have a special place in the collective heart of the SLAM Dome because of his page years ago in the Portland media guide, which said: “BIRTHPLACE: N/A”

• And the Nets are now under the luxury tax threshold but they still don’t have a big man to help out with Krstic gone. Worse, Collins the Greater threw his back out while putting on his sneakers.

• Mark Cuban wonders if teams in the Atlantic Division will tank the season just because they might screw around and accidentally have to go to the Playoffs.

• Kenyon and Carmelo are going to do something to help the family of Darrent Williams out financially.

• And finally, this might be the end of the road for Bobby Sura…unless Charlie Ward does like he did with T-Mac and takes him to the river!