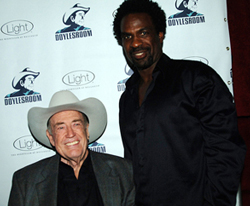 Are the Charlotte Bobcats trying to become my favorite team? Word has it they’ve just hired Charles Oakley for some kind of front office position to go along with his not as tough buddy Michael Jordan. I assume MJ is the one that hired him, and if so then he’s got a serious head start on the executive of the year race.

People joke about Jordan’s gambling and how Oakley is his enforcer and bodyguard. This photo on the left is from Doyle Brunson’s website. If that name is familiar to you it’s because of the movie Rounders and Matt Damon’s character babbling on and on about him. To this day I refuse to play poker with someone that has read that damn Super System book. Charles Oakley has hung out with the guy that literally wrote the book on poker. I rest my case.

As for the Bobcats, Adam Morrison now has a pretty strong mentoring system in place. That is, if he can survive those two making fun of him and calling him all kinds of names (such as you flaming f-). Luckily Adam is not the crying type. Uh… sorry, but I had to make that joke. He’ll be fine. Charlotte had a lot of injuries last season, but those guys better get out there and play, or else…