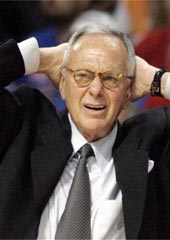 There’s a running joke I have with Lang, Ryan, and whoever else from SLAM accompanies me to any given Knick game. I refer to it as the “uptempo collapse,” a stunning lack of offense AND defense that usually sets in during the fourth quarter and renders virtually any Knick lead unsafe. Up 15 with four minutes left to go? 10 with two? No worries—the Knicks would undoubtedly find a way to lose, blending turnovers, missed shots and aborted free throws into a downright symphony of ineptitude. No coach had the power to stop it.

Of course, Isiah Thomas thinks he has the answer. Because, you know, he always does. His Knicks, he proclaimed, will be playing uptempo ball this season. Because that’s what the players wanted to do under Larry Brown, and, you know, the players (who, to a man, have won roughly squat) definitely understand the game better than a coach who’s won championships at every level possible. Somewhere Bobby Knight is hitting himself with a chair, a whip, whatever he can get his hands on. And Larry Brown, well, he’s probably not even paying attention anymore.

Basically, if this is the way the team’s going to be run, pretty soon the Knicks will be having ice cream for pre-game meals and cancelling practices and shootarounds for chauffered, team-financed runs to Gucci and Louis Vuitton. And Zeke will be the most beloved coach in NBA history right until he gets fired on November 5th.

Let’s look at the negatives of this whole “uptempo” thing first—not because I’m by nature a negative person (although, well, I am), but because I can’t think of any positives at the moment.

1. The Knicks were a young, mistake-prone team last year. Larry Brown knew this, and slowed things down to a crawl so the younger guys could figure out how to play the game properly. Fun to watch? No. Fun to play? Probably not. Gonna lead to a lot of wins? Well, maybe. Eventually. But no one in the NBA wants “eventually,” they want NOW, so they can get those big contracts and cool endorsement deals and neat championship belts. Rings. Whatever. So Isiah’s thinking “let’s speed things up and make the game fun for everyone!” Except for the fact that more possessions make for more mistakes, and fast play leads to sloppy play, and all of a sudden you’re losing by 30 in the second quarter and no one’s watching anyway. I don’t even want to think about how many threes are going to get jacked up with 20-plus left on the shot clock. At some point this season, Clyde Frazier will get literally tongue-tied.
2. The point guard is Stephon Marbury. Yeah, Steph’s an exciting guy. Can lead the break—or finish it—and he’s got the Coney Island pedigree of a streetball legend. But does anyone remember the last time he REALLY pushed it? In spurts, sure. Maybe he ran it a little in Phoenix when Amare was healthy, and he ran a lot in Minnesota with KG. But lately? Nope. I saw Steph a lot when he was a Net—with Kenyon Martin on the wing, no less—and he pretty much stuck to the half-court offense. The Nets didn’t start running until Jason Kidd arrived. And the Suns ran a lot more with Kidd, and later Steve Nash. Getting back to Starbury, this is a 29-year-old guy with high mileage (a lot of it on concrete) and a history of knee and ankle problems. Sounds perfect!

3. Eddy Curry and Jerome James. Hm, you’ve got two high-priced centers with weight issues, heart issues, and motivation issues. Oh yeah, they’re probably just raring to run. Get ready for a lot of four-on-five ball. Or at least a lot of Channing Frye.

4. Does Isiah even remember how his Pistons won their championships? It sure wasn’t by fastbreaking all the time. I mean sure, they did it sometimes—everybody fastbreaks sometimes—but they actually won by (get this) playing basketball the right way. Somehow I feel like LB’s gonna end up having the last laugh. Or at least another one.