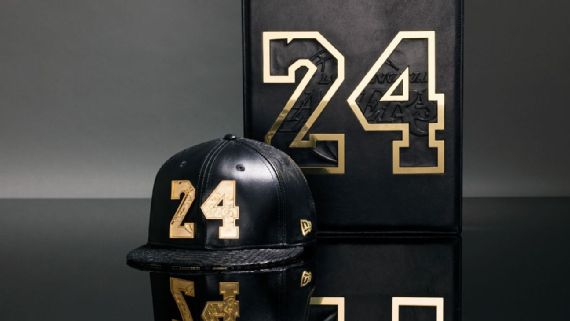 Everyone is looking to cash in on Kobe Bryant’s impending retirement.

If you have the money, Anschutz Entertainment Group (the behemoth that runs the Staples Center in Los Angeles) has some luxury KB goods that may be of interest.

AEG announces exclusive line of Kobe merchandise, including a black lambs-leather cap with an 18-karat gold "24" retailing for $38,024.

For those looking to save a little money, AEG's exclusive Kobe merchandise line also offers a purple diamond cashmere cap for $24,008.

Not to be outdone, Nike is calling April 13 (the date of the final game of Bryant’s 20-year career) “Mamba Day”.

“This city is all about spectacle,” said Sean Ryan, vice president of AEG Merchandise. “Derek Jeter might have represented the blue-collar people of New York, but Kobe is more about showtime, so we had to think of diamonds and gold.” […] The merchandise is licensed by the NBA and Bryant’s company, Kobe Inc., which will receive an undisclosed cut of each sale.

The $38,024 hat, made by New Era, is made of lambskin and snakeskin, a reference to Bryant’s “Black Mamba” nickname, and contains 3.5 ounces of 18-karat gold in the shape of his number 24 on the cap’s front. Only eight have been made. […] Also limited to eight, a purple cashmere hat with gold snakeskin that features yellow diamonds will sell for $24,008 each.

Nike, which has sponsored Kobe Bryant since 2003, announced Thursday that it will honor the Lakers superstar with Mamba Day on April 13. […] More than 200 Nike-sponsored athletes across sports will wear black and gold shoes over the next week in homage to the five-time NBA champion. Athletes mentioned as participating in a Nike release include Rory McIlroy, Mike Trout and Carli Lloyd.