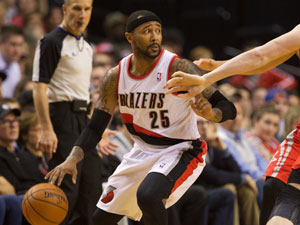 Free agent guard Mo Williams has agreed to terms with the Minnesota Timberwolves. It’s a one-year pact at $3.75 million for the veteran. Per the Star Tribune:

The move – announced by William’s representative Priority Sports on Monday afternoon – brings the Wolves a veteran backup who can play both point and shooting guard. There is a good chance he could wind up running the team’s second unit along with rookie Zach LaVine in the backcourt.

Williams, 31, is coming off a 2013-14 season in which he averaged 9.7 points for Portland, his lowest average since his rookie season in 2003-04. Point-guard sized, but with a scoring mentality, Williams is a career 43.8-percent shooter, 38.5 on three-pointers.

Because the Wolves are so tight against the NBA salary cap, the team used a portion of the $5.305-million mid-level exception to sign Williams, giving them just over $1.55 million to use on another move.