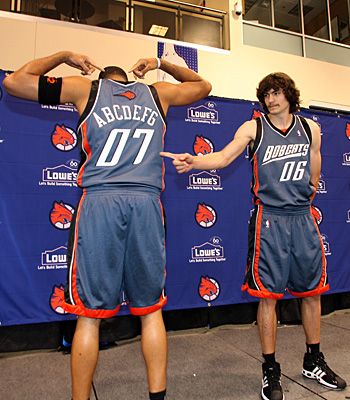 Fri-Day! Yes! And let’s get right to it…

QUOTE OF THE DAY
“Sometimes you hear music being played. It’s [five] musicians and you say, ‘Man, that’s really good music.’ Well, to them it’s unbelievable music. They’re playing because they feel good about it and you’re sharing it. That’s the way the game should be played. These guys get it.” — Mike Krzyzewski, on Team USA.

THE LINKS…
• Why SLAM is better than The Source or Maxim.

• Huge news from the basketball World Championships, where Tony Parker‘s injured finger has turned out to be a broken finger, and he’ll now miss the entire tournament for France. This would normally seem to be a crippling blow, but luckily France has Boris Diaw, and as Suns fans told me all season, Diaw is one of the best players in the NBA and him playing alongside Steve Nash had very little to do with him him being named the NBA’s Most Improved Player last season. So Diaw should be able to carry France now, right?

• The bad news is that the Cavs asked their county in Cleveland for cash to help them renovate their arena, and the county said nope. The good news is that Cavs have begun construction on a new practice facility just outside Cleveland. I’ve been to their current facility, in their arena, and it’s nice and all, but this place will put their offices and everything else in the same building. It will be called the Cleveland Clinics Courts — seems a little risky to name it after a hospital, unless they’re going to re-sign Dajuan Wagner. Here’s a slideshow of pictures of the facility. Strangely, it looks a little like a ski chalet.

• The BETcats have unveiled their new third uniforms, which they claim are blue but look pretty darn gray to me. And I think Sean May got the wrong jersey.

• Those of us who’ve attended Nets games the last few years have noticed a rather large — ridiculously large, actually — construction project underway right next to Continental Airlines Arena. Come to think of it, it’s more like a de-struction project, because for all the dust and noise and activity coming out of there, nothing has really been built. Sure, there was something allegedly happening — a huge, extravagant mall that was supposed to include a minor league baseball stadium, a ski jump, a go-kart track and, strangely, a YMCA — but there was nothing happening. It always seemed like such a strange idea to build something so dramatic out there, because there’s nothing out there but swampland and office parks. Well, today’s New York Times reports that it looks like the construction company has run out of cash and the thing might end up unfinished. When you think about it, it’s rather emblematic of the Nets themseves: a great idea, lots of promise, a good base to build upon, but when it came time to put the money down and put the thing over the top, they couldn’t quite step up.

But at least they signed Eddie House.