Trading Out of the Double Team 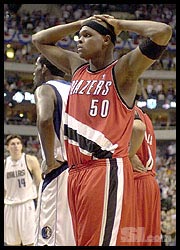 I just want you to think about this for a minute: Zach Randolph and Darius Miles for Chris Webber. The Blazers eat a large percentage of the outgoing salaries.

Webber’s deal is expiring at the end of the season while Randolph and D Miles have 4 and 3 years remaining, respectively. Considering the guys that Philly would be importing, the trade wouldn’t be fair straight up because the Sixers would be saddled with excess financial and emotional baggage. That said, the teams would have to come with some sort of agreement. For the sake of this discussion, let’s say the Blazers still pick up 60-65% of the contracts after Webber’s deal expires.

Why it would be good for the Sixers: The Sixers have no chance of winning right now with C-Webb, AI and Samuel Dalembert clogging up their cap. AI only has so much time left, and he needs all the help he can get. It won’t hurt D-Miles’ game that there will be no shots leftover in the offense for him to take. In theory, he’ll just have to run the floor and fight for his scraps. Randolph would give the Sixers a tough interior scoring presence for the first time since, um…Charles Barkley? With AI’s monopolization of the ball, Randolph’s inability to find the open man wouldn’t be so much of an issue because he would be the one needing to get open—when open, he would shoot. And, yes, eventually he’d learn to find Kyle Korver open on the wing.

Worst case scenario: The Sixers end up having the worst team chemistry in the history of basketball. This would finally lead them to deal a disgruntled AI and cut one of the other two malcontents. (The Blazers absorbing the majority of the contracts would make it plausible for Philly to cut somebody if disaster struck–I think). In short, the Philadelphia 76ers get to start anew in the relatively near future with cap space and potential for a new identity.

Why it would be good for the Blazers: Webber provides a bit of leadership during his short stay in Portland and makes his last ditch effort at salvaging the twilight of his career. C-Webb might even find the fountain of youth at the contract year country club. Portland is finally able to nurture its young talent without Randolph and Miles around and Lamarcus Aldridge gets a tutor for a year. The Blazers also have the time to absorb some of the contracts because their most important players are still in their rookie deals. And who knows, Webber’s knees might feel better in a town that’s more like Sacto than Philly.

Worst case scenario: They continue to suck and continue stockpiling draftpicks while using their extra finances to try and right the ship immediately.