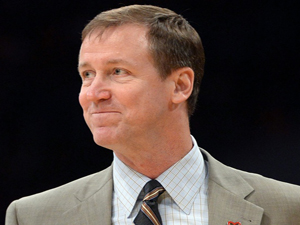 On the heels of the Portland Trail Blazers reaching the conference semifinals for the first time since 1999-2000, the team has rewarded head coach Terry Stotts with a multi-year extension. Stotts led the squad to a 54-28 mark in 2013-14, its best record since 2008-09.

Terms were not released, but a league source with knowledge of the contract told The Oregonian it’s a three-year deal, which includes a team option. The Blazers picked up a team option for next season, extended a second year and added a team option for the third year of a deal that could keep Stotts in Portland through the 2016-17 season.

Stotts, in his second season with the franchise, masterfully directed the team through a quick two-year rebuild, transforming it into one of the best in the Western Conference. With an entertaining, free-flowing offense that relies on movement, crisp passing and teamwork, the Blazers blossomed into one of the NBA’s best offenses and one of its most enjoyable to watch under Stotts.

The Blazers won 54 regular season games in 2013-14 and reached the Western Conference semifinals, beating the Houston Rockets in the first round before falling to the San Antonio Spurs. The 54 wins were 21 more than last season — accounting for the largest single-season improvement in franchise history — and the Blazers won a playoff series for the first time since 2000.

“Terry has done an outstanding job during his first two years with the organization,” general manager Neil Olshey said in a release. “This extension illustrates our confidence in him as our head coach as well as the Portland Trail Blazers’ continued commitment to building a model of consistency and stability.”