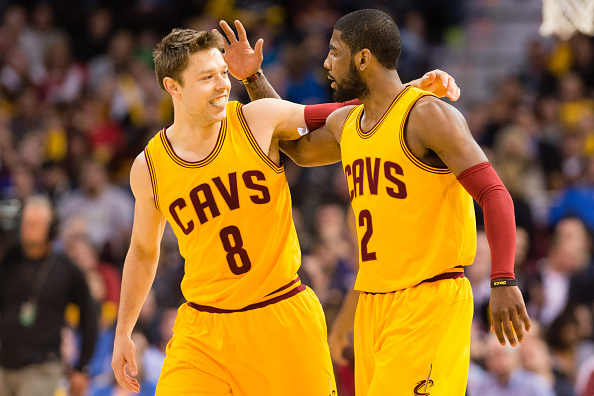 Backup PG Matthew Dellavedova has proved to be an important weapon for the Cleveland Cavaliers in the 2015 NBA Playoffs. Between stepping in for key minutes in the first round, and playing a more prominent role when starter Kyrie Irving was sidelined in Game 6 against the Bulls, when Delly scored 19 points, the 24-year-old Aussie has come up big.

Part of Delly’s success recently can be attributed to his battles with Kyrie during his first NBA season. According to teammate Tristan Thompson, the pair would routinely get into it in practice, with Delly refusing to back down from the No. 1 pick Irving.

“Yeah, they used to fuck each other up,” Thompson told Dave McMenamin of ESPN. More:

“Yeah, they used to f— each other up,” said Tristan Thompson, recalling the times he’d have to play peacemaker in Cavs training camp in the fall of 2013 when Irving, the franchise player and former No. 1 pick, was matched up with Dellavedova, the undrafted rookie free agent just trying to make the team. “They used to go after it every day. There would be times when they’d be ready to fight each other.”

The distaste between them started a few months before that, in the summer, when Irving sized up Dellavedova for the first time during a pick-up game.

“I played him in the summer time and he was going into summer league, I was going into my third year and I was like, ‘Who the hell is this kid?’ I was like, I’ve never heard of him,” Irving said. “I had heard of him, because of St. Mary’s, but I had never played against him. So, I’m coming in and he just basically, every fast break, he was just fouling the s— out of me. I was like, ‘OK, well, maybe I’ll see him in training camp.’ So, we went through training camp, every single day we went against each other and damn near almost fought every single day.”

Mike Brown, known for his lengthy practices, was coaching the Cavs at the time. More practice time meant more 1-on-1 battles between the point guards.

“Early in the season when you scrimmage more at practice, it definitely almost came to that — having to be separated,” said Dellavedova. “But it was never [personal]. We were both just playing hard and wanting to win in practice. It’s been great for my development, having to try to guard Kyrie every day in practice.”