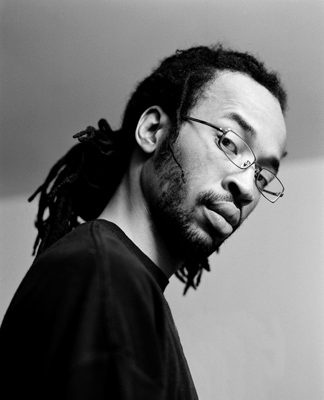 Rich Medina is as respected on the turntables as he is on the basketball court. While many people might be familiar with his name from music he crafted for The Roots, Jill Scott and Eve, heads might not know that Medina was once a step away from the NBA.

Although the New Jersey native spends most of his time crafting hit music and working the decks, he still makes time to feed his basketball Jones. SLAM caught up with Medina on a break from his ever-spinning schedule to wax philosophical about a few of his favorite things.

SLAM: So, did you grow up playing ball?
MEDINA: Yeah, I did. I went to school in Lakewood, New Jersey so I played in the Jersey Shore League, AAU ball, with a team called the Road Runners. I went to Lakewood High; we were a bunch of gazelles. We were a team that probably beat a lot of other teams simply because we were better conditioned. I played for Pat Richardson, he was a pretty big star at Temple back in the 60’s and he was a real stickler for conditioning, so we always came ready to play. The school was pretty well known for basketball.

SLAM: What position did you play?
MEDINA: In high school I played a lot with my back to the basket, simply because I was 6’6 and we weren’t the type of school to have guys who were 6’10 or 6’11 on the team. Even though I was relatively slim guy for my height, I had to play a lot with my back to the basket. I really didn’t develop my face-up game until probably the end of my freshman year going into my sophomore year in college.

SLAM: How did you end up going to play at Cornell?
MEDINA: All my guidance councilors, teachers and people who knew my mom had been in my ear for years about the idea of it. I happened to do well in school. People believed in me and they thought I would be able to excel in a situation like that.

SLAM: And what was the basketball culture like in the Ivy League?
MEDINA: In the Ivy League, they’re technically not allowed to grant any athletic scholarships. The idea is that you’re dealing with a lower caliber athlete, when you’re really not. It just happens that they are cats that are about their schooling just as much as their basketball. It’s still division one ball, still top-flight ball, we played Syracuse every year and our power rating was pretty heavy in terms of strength of schedule. It was a prototypical D1 basketball experience except for the fact that it was Cornell and that there was no skating academically at all. I played pretty well the whole time I was there. I had a small injury my junior year that sidelined me for a minute. I put up some pretty decent numbers against some serious ball players.

SLAM: Did you play a lot of ball in the summer?
MEDINA: Yeah, I played in the Jersey Shore Summer League; I played in Magic Towers, Hamilton Fish, and Ray Diaz in New York. Jersey Shore League was crazy because all of the pro guys would come back and my high school coach had us in there getting our asses kicked night in and night out by grown men. It was a very physical league. This was in the 80’s and you had all the New York and New Jersey based players coming down. I remember seeing Mark Jackson giving people hello, Terry Dehere, and all of the St. Peter’s College and the boys from St. Anthony’s high school. Cory Smith was playing ball in Elizabeth at the time. Marvin Andrews and Tony Walker I played with in high school.

SLAM: So, you did a stint in the USBL?
MEDINA: Well, there was a tryout in Lakewood and Marvin and Tony were trying out and everybody around me was telling me that I had a chance to make the squad. There was a lot of talk about the pros and the European guys who were coming over to the league to do their thing. Initially, I made the taxi squad and eventually I made the uniform squad a couple of games in. It’s not like I got there and made serious noise or anything like that. But, I can definitely say that I participated on that level.

SLAM: The USBL was a lot different back then.
MEDINA: At that point it was really good. I mean, Tim Legler was playing for the Philadelphia Spirit. Lloyd Daniels played for the Long Island Surf at the time. I played for a team called the New Jersey Jammers with Danny O’Sullivan, Marvin Andrews, Kermit Holmes from Oklahoma, Daryl Walker from Seaton Hall. The squad was heavy man, a lot of those guys were borderline guys in terms of being ready to play in the league immediately. Also guys who were back and fourth between overseas and the USBL, guys who were still chasing that basketball dream. The level of play was best described as “hungry,” as long as the guys were in shape.

SLAM: So where did you guys play your game out of?
MEDINA: We actually played our home games at my high school gymnasium, Lakewood High School. It was pretty crazy to play pro ball in the same gym that I played high school ball in. Unbelievable. I was a role player on the squad for the guys who were on a little higher of a level. I mean, guys who had agents and played overseas. I was the Ivy League kid who was trying out for the team; I was shocked when I made it. I gave a lot of dudes help in practice and I feel like I contributed to some wins while I was there. I didn’t play a whole lot. It was quite an experience.

SLAM: Were you doing music while you were playing ball?
MEDINA: Yeah, music was a big part of my life. That never really went anywhere.

SLAM: How did you decide to stop playing?
MEDINA: Well, I got hurt. I blew out my rotator cuff out and it was just one of those things where you’re a young dude and I probably had a year’s worth of rehad ahead of me. I would have had to start all over in terms of getting with an organization that would allow you to develop. I was one of those kids that was probably about five or six years away from a legitimate shot at the league. I would have had to have gone to Europe and play a few seasons of developmental league ball over there or whatever it may have been.

SLAM: Do you regret not trying to continue playing?
MEDINA: Nah man, not at all. Sometimes you have to pick your shots. It came to a point with me where I could have chased the dream and lived that out, or I could have started to exercise my degree. Being that I was the first person in my family to go to college, there were a lot of things tied to that. So it was time for me to buckle-up and think about my family for a minute. I feel like I pused myself to the limit. I feel like I was good enough to be considered a respectable ball player. I was a regional All-American in high school, I was all-conference a couple of times when I was in college. The music was pretty heavy, so it was time for me to make some money and help my mom out, music allowed me to do that. So, there are really no regrets.

SLAM: Do you see any similarities between hooping and DJing?
MEDINA: I mean, anything that has to do with being fluid and working with other people, you could always make a basketball analogy. Sometiems you’re the man, sometimes you’re a role player. Sometimes you’re on the bench, sometimes you have the ball in your hand. It’s about how consistent you could be on either of those levels. There can be a consistent athlete, but they can’t translate it to music or vice versa. I feel I’ve used my playing experience to help relate to being dedicated to my craft.

SLAM: I don’t DJ, but it would seem to me that a DJ has to be creative on the spot. I think it’s the same way in basketball.
MEDINA: Oh, no question. Your ability to think on your feet is your best friend. You want to know the plays well enough that you can have a variation on them and do something else. In basketball, the best shot you take is the first one after the airball. As a DJ, the best record that you have is the record that saves you from your biggest mistake of the night. The parallels are there, if you study enough of either game you will realize them. You have to be ready to present yourself to a room full of people as a DJ and it’s the same in basketball. You see superstars get booed after one bad shot. You’re always under the heat lamp. You’ve got to bring you’re a-Game or keep your ass at home.

SLAM: Do you still ball at all?
MEDINA: Hell yeah, we just got eliminated from a tournament downtown in Manhattan. I play on a squad with Bobbito and a few other cats. In ’99 I severed my left achillies and when I came back I was out of shape, my lungs weren’t right. Bobbito and I had a long conversation and he was like “You need to take care of your cardio before you come out here and try and dunk on people.” I took that shit to heart. I can go a full game and not feel like I was dying.

SLAM: So, what’s wrong with basketball?
MEDINA: I think it’s the same thing that is wrong with everything else. The media has made everything a cartoon of itself. We’re looking at these cartoons and it’s supposed to be the same way we looked at our idols back in the day. The approach to the game is totally different. They’re looking peoples personal lives in regards to their contributions to their teams. With all the 18-year-olds jumping into the league on a regular basis, the fundamental parts of the games, the two plus two, has been left by the wayside. There are guys making more money off endorsements than they do actually doing the thing that got them there.

SLAM: Do you have any favorite teams?
MEDINA: I grew up a Knicks fan, I really love watching the Suns play. The ball comes off the backboard and they’re like “fuck it.” If you get tired they’re really going to get in your ass. As a 6’6 guy that can handle the rock, I enjoy that temple of play. I love a faster paced game.

SLAM: Growing up so close to Philly, you didn’t cheer for the Sixers?
MEDINA: I love the Sixers, but they can’t keep a hard-on. They catch wood and then they fucking loose it. As soon as she takes her clothes off they just loose the wood.