Tyreke Evans Says Pelicans Are ‘Right There’ With the Warriors 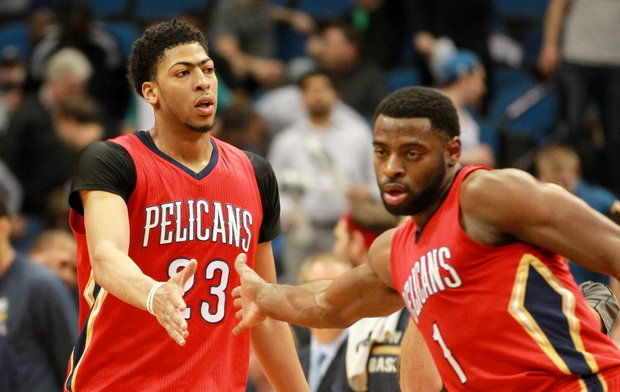 Alvin Gentry, the New Orleans Pelicans’ new head coach, screamed into a TV camera in June that the squad he was about to inherit would be in the NBA Finals next summer.

Evans thinks the Pels aren’t all that different from the defending champion Golden State Warriors—the same team that swept N.O. out of the 2015 Playoffs—and that they’re ready to become title contenders.

“I don’t see why we can’t do it,” Evans said. “We have a great team. I don’t see our team any different from the Warriors. I think we’re right there, even though this is going to be our first year with coach (Alvin) Gentry. If we push each other and work hard, we can make that next step. It’s not going to be easy, but I think we have that chance.”

“We’re a young team. We need to get up and down,” Evans said. “The last game of the season, when we played the Spurs (needing a win to make the playoffs), we played an up tempo game. We came out of the gate getting stops and going for baskets. That’s been our best style. Playing like that is going to be good for us. We have a lot of guys with athleticism.”

The adjustment for the team will be losing Monty Williams, the Pelicans’ coach for the past five seasons who oversaw improvement in each season after trading Paul. Williams was fired after the playoff loss, while general manager Dell Demps was kept in place after both were thought to be in jeopardy earlier in the season. […] “It’s tough,” Evans said. “We made a good run. We made it to the playoffs. So I wasn’t expecting it. I thought he would maybe finish out next year, see how that goes. But I definitely was shocked. With the season we had, I think he did a great job with the injuries for two years and making the playoffs and beating the Spurs in the last game of the season. That seemed like a big game for him and for us. So I was shocked when I found out. […] We moved on it. We’ve talked about it with each other. When it happened, a lot of guys were asking each other if anyone was expecting that. But that’s the business part of the NBA. He’s with another team (as associate head coach of the Thunder) now, and I know he’s going to do good over there. And I’m looking forward to playing against him this year.”

Related
Alvin Gentry: Anthony Davis is ‘the Best Player in the NBA, Not Named LeBron James’