Handcuffed by The Past 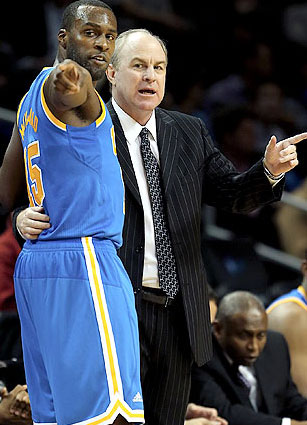 The great coach stands guard outside the newly renovated Pauley Pavilion, his watchful eye monitoring droves of UCLA fans as they file into the stadium with kids by their side. They’ve come to watch the Bruins, but mostly they have come to pay homage to the legacy he built—and the $136 million shrine that was built for the infallible Great Coach who never swore, never drank and almost never lost.

John Wooden passed away in 2010 and last coached a college basketball game nearly 40 years ago, but you wouldn’t know it by going to a UCLA game today. The very court bears his name, and a seat—just behind the UCLA bench and painted gold—remains forever empty in his honor. The entire east concourse has been deemed “Wooden Way,” full of memorabilia and remembrances, a smaller shrine inside the larger one. Leave the confines of Pauley Pavilion and his legacy still follows you; when Pauley had to be closed for renovations last season, the women’s basketball and volleyball teams played in the building next door.

UCLA is proud of their spiritual father, understandably. Under his leadership, from 1948-75, they became the most dominant program that college basketball has ever seen, winning 10 National Championships in 12 seasons and sending some of the greatest players in NBA history on to Hall of Fame careers. In the four decades since Wooden retired, UCLA has continued to have incredible success; yet, they are both entranced and hampered by the memory of the messianic and unflinching bronzed face of their program.

Three days ago, it cost Ben Howland his job.

On a chilly (by L.A. standards, anyway) Tuesday night in December, UCLA hosted Long Beach State in their new digs. Led by their freshmen tandem of Jordan Adams (24 points) and phenom Shabazz Muhammad (21 points), the Bruins jumped out to a 9-2 lead and dominated, shooting a whopping 58.9 percent to grab the 89-70 win. Long Beach would love to turn the match-up into an annual rivalry, but UCLA made it clear that, until further notice, they’re still the top ticket in town.

Some say that the renovations to Pauley Pavilion were a direct response to the USC’s Galen Center, opened a few years ago in downtown L.A. But while the Galen is nice, it’s maybe too comfortable, almost quaint. For some reason, USC continues to treat basketball with the same indifference that a toddler treats broccoli—“Well, if we haaave to.” Not exactly a raucous college atmosphere.

By contrast, UCLA makes a big effing deal about basketball. The new Pauley Pavilion feels less like a large Galen Center, and more like a miniature Staples Center. There are high-def screens everywhere, more than 100 in total, floating graphics from one end of the court to the other, integrating with more screens on the scorer’s table and above the entrance tunnels until it feels like you’re watching Avatar 3D instead of a real-life basketball game. In the lobby, the Champions Made Here wall lists all the UCLA National Champion teams through history, glowing like an ultra-iPad that could be updated the second any Bruin squad wins another natty.

With students on their winter break, most of the crowd (over 8,350 in a building with 13,800 capacity) are the salt-and-pepper type—fathers and even grandfathers who were students during the Wooden Era, who left their Brentwood offices early to share the old Bruin spirit with their sons at the New Pauley. This is the typical UCLA fan these days, and the school knows how to market to them: Nostalgia. Shabazz Mu-who? Come here, sonny, and let me tell you about a little someone named Bill Walton.

For some reason, UCLA clings desperately to its distinguished past, and it’s costing them their future. In the 40 years since Wooden retired, UCLA has sent players like Baron Davis, Matt Barnes and Jrue Holliday to the NBA. Darren Collison, Kevin Love and Russell Westbrook went to three consecutive Final Fours from 2006-08. The new Pauley bears little tribute to players like Reggie Miller, Tyus Edney, Jordan Farmar and all-time Pac-12 leading scorer Don MacLean. (Big ups to Kiki Vandeweghe, who got a shout-out on the jumbotron during the Long Beach game, but still.) Hell, UCLA won a National Championship in 1995 with Ed O’Bannon and Toby Bailey, which, let’s be honest, is more impressive than any one of Wooden’s titles.

There is little room to commemorate recent success in the new Pauley Pavilion. There is only room for Coach, the warden in a prison that the Bruins have built themselves, and now they’re stuck wondering why people aren’t jumping at the chance to be admitted.

It’s a phenomenon unlike any other in college basketball. Indiana doesn’t reserve a seat for Bob Knight, who won more games. Kansas home games don’t open with video tributes to Dr. James Naismith, and he invented the damn game. At UCLA, all you ever hear about is Wooden, who won a ton and dropped sparkling life lessons like loose change, never contributed any lasting innovations to the game of basketball except the High Post—a pretty obvious one when Lew Alcindor is your center—and damn near had Championships vacated due to significant violations.

Maybe the UCLA obsession with Wooden is a commentary on the fast and loose nature of college basketball today. In the one-and-done era (UCLA has had its share), it’s nice to hold on to something that lasts. Wooden was never one to embrace change—he tried to outlaw dunking and was constantly at odds with Walton about the length of his hair.

That’s part of his beauty, but it’s also his biggest weakness. No matter how hard you try, you can’t prevent the future. To his credit, Wooden saw that and retired just as the game was about to pass him by. He is forever remembered as the master of his domain, but it was more about timing than anything else.

Ben Howland bought himself some time by going to three consecutive Final Fours, but it ran out this week. UCLA severed ties with their head coach while the rest of the country scratched their heads in confusion and wondered why you would jettison a guy who brought you that much success. The problem isn’t that UCLA did the wrong thing; it’s that they did it for the wrong reasons.

Ask a UCLA fan and they’ll tell you that Howland was fired—regardless of those three magical seasons, several exceptional recruiting classes and the ‘12-13 Pac-12 championship—for two reasons: He changed his style of play and he changed the type of player he recruited, both for the worse. And they’re right.

After that last Final Four run in 2008, Howland began to move away from his lock-down defense and turned to five-star recruits rather than the unsung blue collar guys like Westbrook and Collison. The result was a disastrous stretch of 42 losses and only one NCAA Tournament win in the last four years. High-profile recruits like Drew Gordon and Tyler Lamb didn’t work out, others like Malcolm Lee and Josh Shipp were disappointments, and I could write a book on Reeves Nelson’s issues.

Howland’s gambles didn’t pay off. But then, UCLA fans were the ones who demanded he take them.

As so often happens in L.A., success jaded the Bruin faithful. You go to three straight Final Fours and the spirit of the Great John Wooden reminds you it’s your manifest destiny to go back again and again forever and ever amen. Howland changed his style from defensive to uptempo because UCLA fans demanded he do so. Howland built his program around talented but volatile recruits because UCLA fans demanded he do so. On a high after their Final Four success, Bruin fans felt entitled to a show and they felt entitled to the best players in the country. Howland adopted those ideas and when they didn’t work out, the fans pinned it on him. Plain and simple. No wonder VCU head coach Shaka Smart turned down the gig; who would want to work under those conditions? UCLA used to be a dream job for even the biggest coaches in the country. Today, it’s a pawn in their contract negotiations.

If UCLA wanted to fire Howland, they could have done it last season with no guilty conscience. Instead, they chose to pull the trigger after a league title and an NCAA Tournament loss that happened in part because Jordan Adams was injured and Shabazz Muhammad pulled a Te’o and let personal issues hurt his game. How can you convince a potential coach that he’ll have a secure job when those are grounds for dismissal?

Howland went through a couple of rough seasons. But in the midst of that darkness came THREE CONSECUTIVE FINAL FOURS, which, if you think about it, is nearly as impressive in the current cutthroat world of 68 Tourney teams as winning 10 titles back when only 25 schools went dancing each year (and none had anything resembling Alcindor or Walton).

If you’re the kind of fan who read that and found it ridiculous to compare Howland’s achievements to Wooden’s, then guess what: You’re the problem. No one is ever going to win 10 Championships again, and it’s unfair to hold your current coaches and teams to that standard. UCLA maintains distance from the present in order to cling to their past. Coach deserves his due, but going overboard on the Wooden Romance only diminishes the product you’re putting on the court today.

The biggest mistake Ben Howland made as the head coach of UCLA was that he wasn’t John Wooden. Well, that, and listening to UCLA fans.

In death, and through the construction of a new domain that would probably embarrass him, Wooden remains the Wizard of Westwood. The only question is whether that helps or hurts UCLA. As much as Wooden tried to stop it, the future is here. It’s just too bad that the Bruins are handcuffed by their past.

Ryan ZumMallen is a sportswriter in Long Beach, CA. You can find him on Twitter at @Zoomy575M. 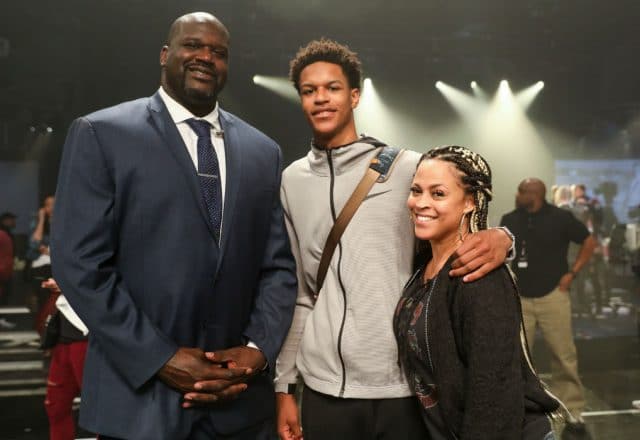