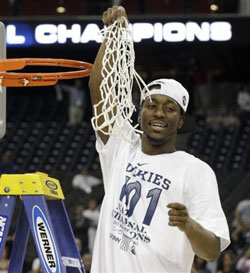 The game itself may not have been memorable, but what Kemba Walker and Connecticut did this season will be hard to forget. The Huskies defeated Butler 53-41 on Monday to win their third NCAA title since 1999.

Just one year after missing the NCAA tournament all together, UConn’s improbable run this season will be remembered for two people: Walkerand Jim Calhoun.

Walker first captivated the country with his performance at the Maui Invitational and brought our attention back to the Huskies when they won five games in five days to capture the Big East tournament crown. In the NCAA tournament he has been equally as exciting and wrapped up the season with 16 points and 9 rebounds in the title game, winning the Most Outstanding Player.

For Calhoun, a season that was full of controversy due to recruiting violations now also ends with his third NCAA title. He is the oldest coach to win an NCAA title and shares the distinction of being one of only five coaches with three championships, along with John Wooden, Bob Knight, Adolph Rupp and Mike Krzyzewski.

The difference for UConn on Monday and perhaps the reason the team was able to get to the next level, though, was Jeremy Lamb. After his team trailed 22-19 at the half, Lamb sparked a Husky rally by scoring all 12 of his points in the second half.

For Butler, there was no perfect ending to its two-year storybook run. An ugly offensive showing left the Bulldogs just 12-for-64 from the field, including 3-for-31 inside the arc. Their 41 points were the lowest scored by a team in the championship since 1946. Butler also becomes the first team since Michigan in 1992 and 1993 to lose consecutive title games.

But while Butler’s run will be talked about for years, UConn’s is even more impressive. What started the season as an unranked, one-man team slowly grew into the nation’s best. Even as recent as a month ago, few thought the Huskies, who finished ninth in the Big East, could make any noise in March.

As the dust finally settles on UConn, we are left with a team that did not lose a game out of conference and won all three tournaments it played in. Improbable? Yes, but at this point we should have expected a win on Monday.

In the middle of it all, of course, was a man named Kemba. Not since Danny Manning and Kansas in 1988 has one player willed his team to a title like Walker. His career in Storrs is likely over, but his legend in college basketball lore is only beginning.