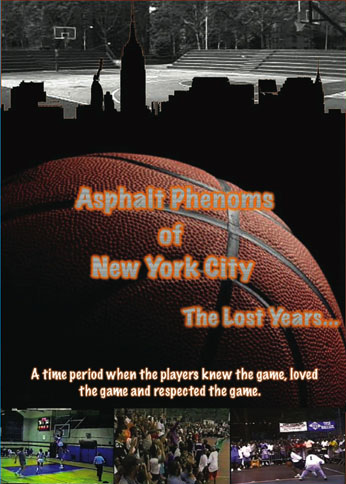 Basketball DVDs are, for some, a thing of the past. The lack of quality highlight moments and, sadly, the lack of street hype around the game have left the hoop mixtape a thing of the past. In the case of “Asphalt Phenoms of New York City: The Lost Years,” the selling point is that the footage included is of legendary players who are known mostly in name and kept alive through oral tradition. The DVD is totally worth checking out and only available at AsphaltPhenoms.com

Being “taken to school” is one of the hazards of playing pick-up ball. The old school cats, who always seem to have “next,” love to remind young pretty boys that the game was different “back in the day.” Played tougher, harder and with a “life or death” attitude toward winning. With Asphalt Phenoms of New York City: The Lost Years, producer Dorian “Black Stallion” Graham—himself a streetball player of some repute—skillfully revisits a time when basketball in the city was the law of the land, an almost secondary government.
Much of the DVD is spent identifying New York’s playground legends of the era that directly preceded AND 1’s takeover of the streetball scene. Players like Ron “Terminator” Matthias, “Sudden” Sam Worthen and James “Speedy” Williams all dominated the city’s playgrounds for decades, but unfortunately, very little video footage of them actually exists. Their reputations were built off the strength of word-of-mouth. As time elapses, fewer and fewer people have first-hand knowledge of what guys like “Master Rob” and “Dancing Doogie” left on the court.
This documentary’s main accomplishment is giving shine to these extraordinary players, some of whom have been known only in name for years. Some love is lost, however, as too much of the commentary centers on the bashing of the modern street game, and the limited supply of real footage is, if understandable, frustrating. Regardless of any shortcomings, though, every streetball enthusiast out there will appreciate the secret history collected in Asphalt Phenoms. Playground knowledge is important because while many legends seem to be disappearing, the pretty boys are only multiplying.— MATT CAPUTO

*Anyone in the Slamonline audience who has produced or directed basketball DVDs or documentaries are free to e-mail. I’m always looking to peep a good hoops flick and would probably review it for the website.