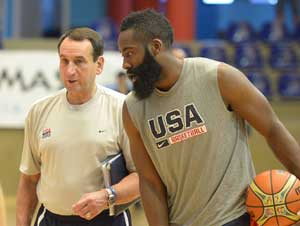 While there is no immediate competition to prepare for, the USA Basketball Men’s National Team kicked off their mini-camp in Las Vegas yesterday evening. After signing a bunch of basketballs and hearing Coach Mike Krzyzewski’s address, LeBron James, James Harden, LaMarcus Aldridge, Stephen Curry and others are getting ready to hit the court. From USA Basketball:

“A little more than a year ago, a roster that would win gold in the FIBA Basketball World Cup was forged inside the walls at UNLV’s Mendenhall Center. This week 34 of the country’s best players will gather under the same roof, but with the Rio Olympic Games still a year away the practices this time around won’t be nearly as intense.

‘If we had competition we had to prepare for it would be a different story,’ said USA Basketball Chairman and National Team Managing Director Jerry Colangelo.

‘We want to spend more time with the players celebrating our journey and keeping things in perspective as we move forward.’

That perspective goes back a decade to when Colangelo took over and brought in many others, including coach Mike Krzyzewski, with the charge of returning USA Basketball to the unquestioned top.

‘We set out to create a new culture and create a situation where players once again were proud to represent their country,’ Colangelo said. ‘We also had to win back the respect of the world basketball community.’

Evidence of the first goal’s success is in this week’s roster, which can be seen Tuesday at 3 p.m. ET on NBA TV’s NBA Real Training Camp: USA Basketball Presented by Jeep or Thursday at 10:30 p.m. ET on ESPN2 for the USA Blue versus USA White exhibition game at the Thomas & Mack Center.

Some of the players, like LeBron James, Carmelo Anthony and Chris Paul, have been around just as long, if not longer, than Colangelo and Krzyzewski. Others like Anthony Davis, Stephen Curry and Kyrie Irving are in the process of taking over the reins and camp will also feature players like Jimmy Butler, Mike Conley and Victor Oladipo who have experience and plenty of talent.”