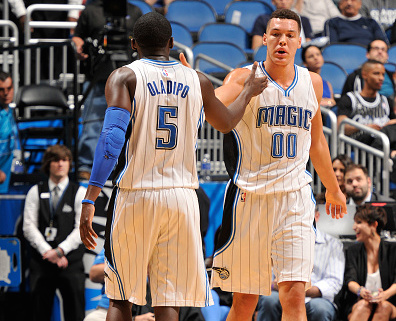 Minnesota’s Zach LaVine is the overwhelming favorite to win tonight’s NBA Slam Dunk Contest, after his incredible performance in 2015.

The man he defeated in the Finals of that dunk contest, though, is predicting a different winner tonight. Magic guard Victor Oladipo told SLAM this weekend that he likes his teammate, 20-year-old Aaron Gordon, to win it.

“I think he’s going to do really well. He’s going to give Zach a run for his money,” Oladipo told us from courtside at the Jordan Brand Invitational inside the Mattamy Athletic Centre in Toronto. “I’m going with my man to win.”

After putting on a show opposite LaVine at last year’s Slam Dunk Contest but ultimately finishing in second place, Oladipo says he never really gave much thought to returning to the Dunk Contest this year.

“I’mma let my young boy go, I’m passing the torch,” Oladipo said. “I told him to have fun, man, and enjoy the moment. Not a lot of people get the opportunity to be in the Dunk Contest.”

Of fellow Jordan Brand athlete Andre Drummond—also participating in tonight’s Dunk Contest—Oladipo guaranteed that Dre would “do something that’s going to make the crowd go ooh and ahh.”

Who do you think will win the Dunk Contest tonight: LaVine, Gordon, Drummond or Will Barton?