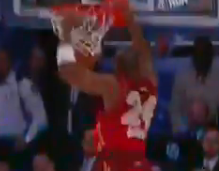 Kobe Bryant’s latest All-Star milestone sent him past Michael Jordan on the all-time scoring list. From the AP: “The Kevin and Kobe show won it for the West at the NBA All-Star game, holding off LeBron James at the end. They got an MVP and a scoring record, too. Bryant scored 27 points, moving past Michael Jordan as the career scoring leader in the game, Kevin Durant had 36 in an MVP performance, and the Western Conference held on for a 152-149 victory over the East on Sunday night. […] Bryant broke Jordan’s record of 262 points on a dunk with 4:57 left in the third quarter and now has 271 for his career. He entered with 244 and passed Oscar Robertson (246 points) and Kareem Abdul-Jabbar (251) earlier in the game.”