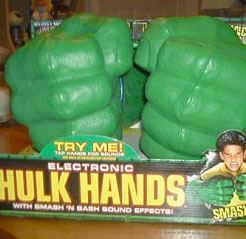 You may have made up your own name for Pietrus’ flagrant foul on Pau Gasol by now: The Flying Double Fists. The Double Axe Handle Fist Smack. The Donkey Kong Super Barrel Gold Banana Smash.

I have my own: The Hulk SMASH!

Like Bruce Banner when he’s in his enraged green state, Pietrus had the intent to harm. The replay shows it all — a wind-up, a clear push with two closed fists, no intent on the ball. If that’s not enough evidence for suspension, look at how he followed it up by talking smack to Gasol.

The NBA plans to review the flagrant foul today, but Marc Stein reports Pietrus should only receive a fine:

Anything more severe than a fine in this case is believed to be unlikely, but players and coaches have grown accustomed this postseason to waiting for the outcome of the review. Entering the Finals, 14 flagrant fouls in these playoffs had either been upgraded, downgraded or assessed retroactively on fouls that weren’t ruled flagrant during the game via the review process.

Some will argue the League should review Kobe’s ‘bow to Nelson’s jaw a couple possessions prior, but the play acts as a complete foil to Pietrus’ flagrant foul. Pietrus closed his fists, wound up, shoved Gasol in the back while he was in the air, and talked smack afterward. Nelson, if anything, ran into Kobe’s elbow before Kobe knew he was there. The contact with Nelson was clearly unintentional on Bryant’s part.

If we look at some of the plays that warranted suspension during the Playoffs this year, Pietrus should be sitting out Game 5. But consistency hasn’t exactly been the League’s strong point.