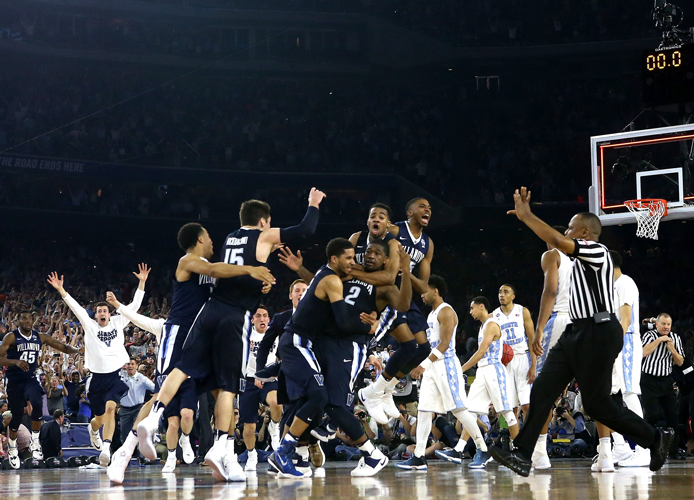 In a finish for the ages, Villanova’s Kris Jenkins came down the court after an impossible double pump three-pointer by North Carolina’s Marcus Paige to tie it at 74 with 4.7 seconds left, and rose up on the wing with .6 seconds left on the clock and let fly a beautiful jumper from behind the arc at the buzzer for the win. The Wildcats secured their second national title in school history with a 77-74 win over the Tar Heels and Jenkins, who finished with 14 points, ran around the court like an Olympic gold medal-winning sprinter.

“I got ice water in my veins!” he yelled in every direction towards the 74,340 fans packed into Houston’s NRG Stadium.

This game wasn’t supposed to end like this. Villanova, wildly regarded as the team without any significant NBA prospects, weren’t supposed to be able to beat the juggernaut from Chapel Hill, North Carolina—especially not with Michael Jordan, the ultimate Tar Heel legend, on hand to witness the action.

In the early going, both teams had plenty of rust to try and shake off before North Carolina’s Joel Berry II hit the first shot of the game, a three-pointer, with 18:40 left in the first.

Villanova led most of the way, with the Tar Heels pulling within two on Brice Johnson’s nasty alley-oop down low plus the harm.

With North Carolina hitting five of their first seven three point shots, they rallied to take a 39-34 lead at the half.

Paige closed the gap to four with a trifecta of his own from the wing, but Jenkins answered with a long-range bomb of his own to stretch the lead back to seven.

With five minutes left, the Wildcats had their largest lead of the game, 67-57, but UNC wouldn’t go down without a fight. They clawed their way back into it with some big time shots from Paige, who hit a cool under pressure jumper from behind the arc with 1:30 left to pull within three, 70-67.

The Tar Heels forced a turnover on the next trip down with some solid defense, and Johnson hit a short jumper off the backboard to make it 70-69 with 60 seconds left.

That’s when the real magic happened.

With 13 seconds on the clock, North Carolina walked the ball up the court and Paige, swarmed by ‘Nova defenders, rose up and hit a double pump three that shook the roof off the stadium.

Then, like the poised bunch they’d been all tournament, the Wildcats walked the ball back up the other way and dropped a pass to Jenkins who sank the biggest shot of his college career—and maybe ever in a championship game.

Paige led all scorers with 21 points, while Ryan Arcidiacono and Jenkins finished with 16 and 14, respectively.

Congratulations to the Villanova Wildcats on their 2016 National Championship. Well deserved.