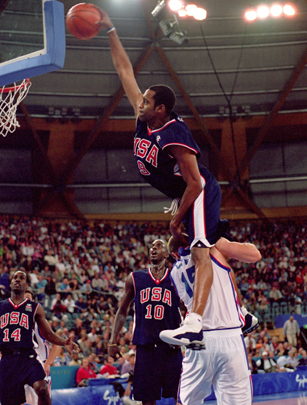 It should come as a surprise to absolutely no one that, when asked, the SLAM readers and nearly all of our staff chose this dunk, Vince Carter’s complete and total emasculation of Frederic Weis, as the best Slamadamonth ever. Well, almost no one.

“Really?” Vince Carter asks. “Still?” Having just been informed of the selection, VC seems genuinely perplexed. Maybe he’s tired after hanging 34 on the Pacers in Game 5 of their first-round series, but he doesn’t seem tired. He walks over, grabs a Gatorade, and pauses. “That was, what, six years ago?”

Yes, Vince. And unless Bron jumps clear over Z in ’08—hell, even if he does—it’s likely that “He jumped over his head!” will still be getting talked about 16, 60 and 600 years from now.

Coming off the 2000 Dunk Contest, it was going to take a lot for VC to top himself. And of course, he did, clearing the hapless Weis and startling everyone who witnessed it: announcer Doug Collins (whose hair still hasn’t recovered), his seen-everything teammates and the global TV audience. And he did it in a real game, an Olympic game, no less, where the comp is supposed to be stiff. Well, Fred certainly was.

Weis himself is apparently playing quite well lately, in Spain, but we think he knows better than to try the NBA. We’re also pretty sure of which dunk he’d pick.

I picked Amar’e Stoudemire over Michael Olowokandi, but what do I know?