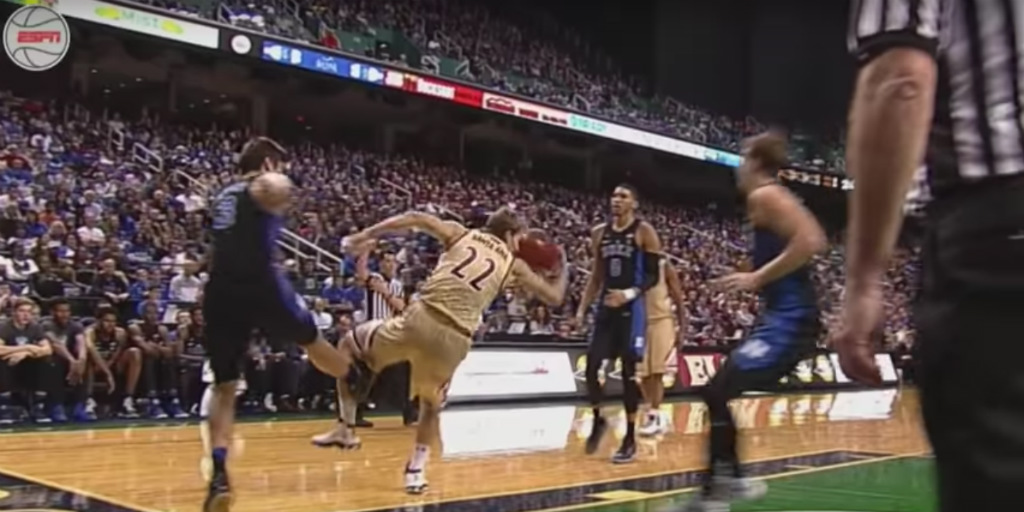 During last night’s game against Elon, Duke star Grayson Allen intentionally tripped Steven Saint Ana and was hit with a technical foul. It marked the third time in a year that Allen has intentionally tripped a player on an opposing team. Allen went to the bench and was clearly upset by the technical call and had to be calmed down by assistant coach Jon Scheyer:

Allen was emotional after the game and apologized to his team, the officials and Saint Ana:

Grayson Allen gets emotional in the locker room after tonight's tripping incident. pic.twitter.com/p34thdrMcI

During the post game press conference, head coach Mike Krzyzewski did not commit to punishing Allen, but Duke released a statement this morning announcing that Allen is suspended for an “indefinite amount of time.”

“We have had the opportunity to thoroughly review the incident involving Grayson Allen from last night’s game against Elon,” coach Mike Krzyzewski said in a statement issued Thursday morning. “As I stated last night, the incident was unacceptable and inexcusable. He took an important step last night by apologizing in person to Steven Santa Ana and Coach Matt Matheny.

“As a program, we needed to take further steps regarding his actions that do not meet the standards of Duke Basketball. To that end, we have determined that Grayson will be suspended from competition for an indefinite amount of time.”

Duke’s next game isn’t until next Saturday, December 31 when they open up ACC play against Virginia Tech.