White Chocolate to the Big Apple? 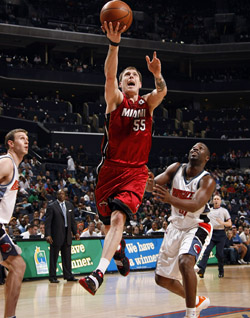 The Ramon Sessions rumors haven’t gone anywhere. The Allen Iverson one makes sense to me (really, Knicks, bring in the Answer for a season! Sell some tickets, score some points, and maintain your 2010 cap number…). But before the Knicks sign either of those guys, they’re first exploring bringing in another player who might sell a few tickets: Jason “White Chocolate” Williams.

Ken Berger of CBSSports.com has the details:

The Knicks are focusing on Jason Williams and have been granted an exclusive, five-day window to negotiate a deal with the unretired point guard, Yahoo! Sports reported. Williams, 33, must navigate a minefield of beaurocracy after filing retirement papers last September, only a month after signing a one-year deal with the Clippers. L.A. relinquished its exclusive rights to negotiate with Williams last week. Any team wanting to acquire those rights would have to claim Williams off waivers first.

I’m not sure what the original Whit Eboy has left in the tank, but, like with AI, it’s fun to imagine him playing for Mike D’Antoni.

JWill was not the only PG the Clips set free in the last few days. Mike Taylor, he of 35-points-at-the-Garden fame, has been waived. I presume the Knicks will speak with him, too.