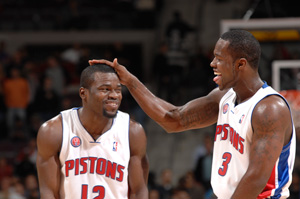 We’re at the park and we’re shooting up for captains. I hit the first shot which gives me first captain and someone else hits after me which obviously gives them second captain. Among the players that we can choose from are Detroit Pistons guards Rodney Stuckey and Will Bynum.

Who am I going to choose with the first pick? Will Bynum!

Bynum is more consistent, scrappier and a better basketball player than Rodney Stuckey. At first I thought it was just an illusion after his strong finish of the 2008-2009 season in Motown. Bynum averaged a solid 11.8 points on 46.2 percent shooting in just 19.5 minutes per contest in his first playoff series against King James and the mighty Cleveland Cavaliers of last season.

While Stuckey didn’t completely bow down to the Cavs, to his credit he did average 15.0 points and 5.3 assists but shot a nasty 39.3 percent from the field. In my opinion, if Bynum was given the green light that the Pistons give Stuckey than he would thrive in the same fashion.

After Stuckey’s first post-season season oust in the 2007-2008 season under Chauncey Billups in which he averaged 8.2 points and 3.4 assists on 37.1 percent shooting from the field, the Pistons were ready to place the franchise in Stuckey’s hands. With Bynum it’s different, it seems as though his performances go completely under-the-radar.

For example, his 24 points and 6 rebounds against the Los Angeles Lakers this past Tuesday in which he shot 75%…Or how about his 27-point effort against the Dallas Mavericks the game before that on 68.8% shooting…Or even his 16 points and 4 assists against the Charlotte Bobcats on 83% shooting on Nov. 11. This man is the truth! He has mad game.

“Bynumite” has a unique ability to bring the playground game to the NBA with his yo-yo handles and wet jumper that slices through the net. He brings that Chicago gritiness to the point guard position as the 6 foot (5-10 if you as me) guard steps up to the challenge to take on each of the League’s elite players at his position on a nightly basis.

Starting with his stupid hops, “Bynumite” will blow by you and dunk over you just like he did against the Bobcats.

Then he will cross you up like he did the last fool who challenged him.

Kevin Garnett challenges Will Bynum and learns his lesson

Or if you are stupid enough to test his street cred then he will just prove it to you like he did on the streets of Chi or at Georgia Tech.

At this point, I am almost completely sold on my opinion that Will Bynum is clearly better than Rodney Stuckey. I’m not taking away anything that Stuckey does because he is a good young talent in the NBA today but I truly feel that if Will Bynum was placed in the same role that Stuckey is currently is in than he would be more productive.

The proof is not only in the statistics, but also for anyone who watches any Pistons games. Bynum always outplays Stuckey and that’s the moral to the story. Through 12 games, Bynum is putting up 14.3 points and 4.2 assists on 50.4 percent shooting as opposed to Stuckey’s 17.1 points and 3.8 assists on 38.7% shooting.

You do the math…

I would be willing to bet that my team at the park, led by Bynum, would beat that team led by Stuckey on any day. Any bets?