When LeBron James, Dwyane Wade, Carmelo Anthony and Chris Paul took the stage to open the 2016 ESPY Awards, they were delivering a message that they all believed in, on a platform where they hoped to establish a bigger point: It was necessary, now more than ever, to be more than an athlete, and to use your voice to help bring change to society at large.

“Let’s use this moment as a call to action for all professional athletes to educate ourselves,” James told the audience at the Microsoft Theater in Los Angeles and the millions of viewers watching at home. “Explore these issues. Speak up. Use our influence. And renounce all violence.”

The ESPYs are usually a fun offseason event for major professional athletes to celebrate some of their greatest accomplishments in the past calendar year; but on this evening, the opening monologue would make way for four of the biggest NBA stars to share a powerful message.

That message: It’s time to fix a broken system that has resulted in too many black lives lost in fatal police shootings. A week prior to the ESPYs, Alton Sterling, a 37-year-old black man, was shot and killed by two police officers in Baton Rouge, Louisiana. A day later, Philando Castile, a 32-year-old black man, was pulled over while driving in Falcon Heights, Minnesota and shot seven times while he reached for his license and registration.

“The shoot-to-kill mentality has to stop,” Wade said. “Not seeing the value of black and brown bodies has to stop.”

“The urgency to create change is at an all-time high,” Anthony added.

Paul talked about following in the footsteps of athletes like Jesse Owens, Jackie Robinson and Muhammad Ali when it came to being ambassadors for social change. The ESPYs moment was applauded and celebrated. Four of the most recognizable faces in sports, conveying an influential message to millions, and surely inspiring others, in their own positions, to stand up for what they believe in. The impact can’t be quantified, but it surely hit home for a lot of people watching that evening.

What is more important is that all four of them were not just delivering words, they have followed up with their actions. Last year, Paul reflected on the monologue.

“It was very meaningful what we said and what we did,” Paul said. “But what we concentrated on more after that was: Then what? It was one of those things that was out of sight, out of mind. The four of us continue to do different things to help the cause.”

In 2015, Anthony returned to Baltimore, the city where he grew up, to join protesters in a march after Freddie Gray, a black man, sustained spinal injuries while in police custody that resulted in his death. In 2016, not long after the ESPYs, Anthony also organized a meeting between community leaders, athletes and politicians in Los Angeles to have an open forum to discuss the rise of police shootings in the United States.

A month after the ESPYs, the issue of gun violence hit home for Wade. His 32-year-old cousin Nykea Aldridge was an innocent bystander when she was shot and killed in Wade’s hometown of Chicago. Wade has remained one of the most outspoken advocates for gun control and stopping the violence around the country. Last year, he and his wife Gabrielle Union donated $200,000 to help allow students from Chicago to join a “March For Our Lives” gun control rally in Washington, D.C.

They need our help! I'm asking my NBA fam to join us in raising money to send kids from underserved communities to March….@gabunion and I will start w/$200K for Chicago. every dollar counts! Who else is in?? Or donate here: https://t.co/pu10Gp76on #GetTheBallRollin

The reach of the four athletes has only expanded. Paul has advocated for stricter gun control on several occasions and the Chris Paul Family Foundation has continued to support communities by partnering with organizations to foster education and health and wellness initiatives, among other things. During the summer of 2018, James and his charity, The LeBron James Family Foundation, partnered with Akron Public Schools to open the I Promise School to help at-risk youth in Akron, OH.

This partnership, like everything else James, Wade, Paul and Anthony are doing off the court, will change the lives of kids and families for generations to come. 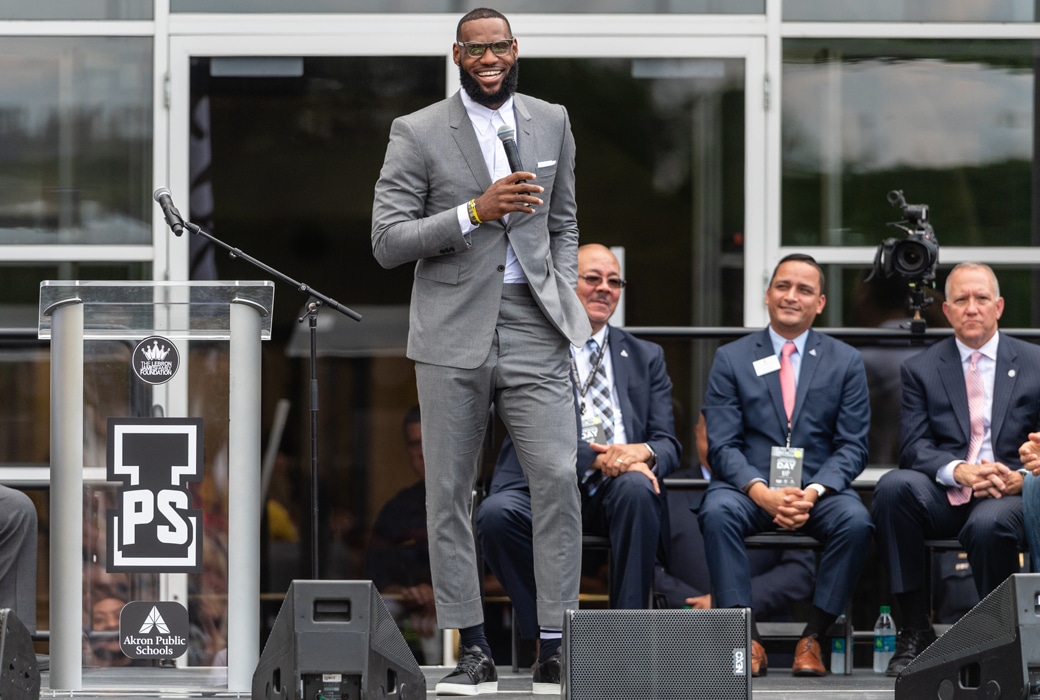 Like any call for social change, there has been pushback, and the criticism from the other side has been loud and rampant thanks to an increasingly divided landscape in the United States. Last year, FOX’s Laura Ingraham said she was uninterested in political advice from “someone who gets paid $100 million a year to bounce a ball,” in response to a video of James and Kevin Durant criticizing President Donald Trump. Ingraham told James to “shut up and dribble.”

James responded shortly after: “We will definitely not shut up and dribble. I mean too much to society, too much to the youth, too much to so many kids who feel like they don’t have a way out…The best thing she did was help me create more awareness. ”

James, Wade, Anthony and Paul have been setting the example for years now. At the ESPYs in 2016, they made everyone aware of the power of using your platform to speak up. And the impact of that speech can still be felt today.