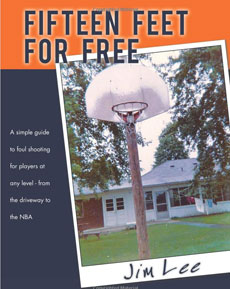 The free throw is one of the most underrated and overlooked aspects of basketball. Poor foul shooting has lost countless close games and even been the source of embarrassment for many of the game’s all-time greats.

Imagine if Shaq made a career 62 percent of his free throws instead of his dreadful 52 percent. He may have well been the NBA’s all-time leading scorer. Even Michael Jordan admitted to not spending enough time practicing free throws. In his new book, Fifteen Feet For Free, Jim Lee highlights the importance of the free throw and gives game-changing pointers on how to improve your consistency at the line.

Jim Lee was a lights-out shooter his entire life. As a matter of fact, he still is. His shooting touch is what propelled him toward a scholarship to play under Roy Danforth and Jim Boeheim at Syracuse University. Lee blossomed as one of the best free-throw shooters at the college level, but his machine-like consistency didn’t come over night. He strove for greatness at the charity stripe at a young age, shooting 100 foul shots every single day starting in middle school.

It was his dream to be the best, and for a while he was. Jim held the Syracuse University record for the highest single season free throw percentage (88.6 percent) for 30 years.

Jim sat down with SLAMonline recently to talk about the importance of free-throw shooting and why it doesn’t get enough love.

SLAM: What inspired your infatuation with free throws?

Jim Lee: I grew up in the country, my brother Mike was two years ahead of me, and we always played in the backyard, and he always whooped my butt at one-on-one. There wasn’t a lot to do in [Kirkwood, NY], and my father always used to say, “You know what wins and losses ball games is free throws.” So in elementary school I got in the habit of shooting 100 shots a day, and I was always able to beat my brother in shooting competitions.

SLAM: Your book is dedicated to your late father. Was there anything about your father that you tried to emulate at the free-throw line?

JL: My father was in a wheelchair from an injury he suffered as a Coast Guard, so we never played with him. But I always watched games with him on TV, and he would always say that if you’re gonna play, the free-throw line is right there, it’s simple, and the best free-throw shooters are always in the game late in games, so that always stuck with me.

SLAM: You mentioned that you had a stint with the San Antonio Spurs of the ABA in 1975, but you said you didn’t capitalize on the opportunity and your pro career ended shortly after. What exactly went wrong during your pro stint?

JL: You know I’m not sure if there is anything I could have done because no matter what, I was always 6-2, 160, so I knew I had to play the best basketball I was capable of, which I didn’t do in San Antonio. So I was traded to an expansion team in Baltimore.

SLAM: But there’s always room for a good shooter on any team.

JL: Well, I played pretty good [in Baltimore] because I knew what to expect. Baltimore already had three other guards so I didn’t fit their needs, so I wish I played as well in San Antonio. I knew I could shoot as well as anybody in the NBA, but it came down to getting your shot off, and because of my lack of size and quickness, I was limited. But I gave it my best shot, and I’d like to leave my mark on the game of basketball with this book while also donating the proceeds to disabled veterans.

SLAM: What type of impact did your professional playing career have on the life and career that you carved out for yourself outside of basketball?

JL: It’s not really the shot I had at a pro career, but everything I learned from playing sports growing up. It gets harder at every level, but it always comes down to a team effort. And that’s what I always tried to carry over to in life, the whole is greater than the sum of its parts. And people don’t realize how good these NBA players are. People always say that [NBA players] never play any defense, but they don’t know how it feels to have that hand-check on you. I always considered myself an overachiever because I was so undersized.

SLAM: You interviewed a number of great players regarding their philosophy on free-throw shooting, such as John Stockton and John Havlicek. Which one, if any, had the biggest impact on your technique and playing style?

JL: Well, I have to thank my brother for my technique, because he was always blocking my shot, that’s why I shoot it way over my head. But John Havlicek was always my favorite player. I only wanted to interview guys that I knew and played against, but a friend of mine was able to get me in touch with John, so I jumped at that opportunity. I was actually about to head into a meeting when he called, but I said to hell with the meeting.

SLAM: John Havlicek is clearly ahead of work in the hierarchy of life. Were you nervous talking to your favorite player?

JL: I have to admit I was a little nervous. I told him that he was the only player I ever had a poster of growing up and that I loved the way he was able to move around without getting tired, and that I always tried to play with that intensity. So I tried to emulate that.

JL: Well, that’s the thing. He improved over time, shooting 72 percent in college and 82 percent in the NBA.

SLAM: How did you develop your technique?

SLAM: Did shooting all of those shots in your backyard help you psychologically as well?

JL: Absolutely. When I was at the line in games I would just visualize myself in my backyard. And that’s why I held the record for most consecutive free throws until it was broken by Gerry McNamara years later. I was comfortable. And when kids I teach go in games and miss free throws late in the game, they’re upset, and I understand that. But [improving] doesn’t start at that point, it starts long before that point, by practicing and just shooting as many as you can.

SLAM: Let’s say someone’s technique is so ugly it’s insulting. Of course practice makes perfect, but she has a game tomorrow. What advice would you give that person in order to make a slight, overnight improvement at the line?

JL: I would tell them to just get to the line, bend your knees, and follow through so that your index finger cuts the net. But kids that I teach, when I’m standing there telling them what to do and fixing the little things, they’ll make 10 out of 10. But in games, when I’m not there, they miss a few. I tell these kids that it comes down to practice, because I’m not going to be there to make sure you’re doing everything the way it’s supposed to be done.

SLAM: What’s most important in becoming a successful free-throw shooter?

JL: Practice, practice, practice. And then balance. You need to stay squared to the basket with your head and shoulders. After balance, it would be eyes on the target, and follow through.

SLAM: But there are a lot of small technicalities within those broad compartments of free-throw shooting…

JL: Exactly. The little things fell into place come game time because I practiced them so much. So when I would head to the line in a game, all I would have to focus on is bending my knees and following through, and my reflexes would take over.

SLAM: Why can’t guys like Dwight Howard and DeAndre Jordan get it right? They’re around basketball 24/7 with some of the best shooting coaches the world has to offer. It can’t be a size thing because Yao Ming is 7-6 and he was so efficient that he used to shoot the technicals for the Houston Rockets, while Ronnie Brewer is a foot shorter and he can’t buy a free throw.

JL: And also Nowitzki, who was a 90 percent free-throw shooter when Dallas won the title. But it seems that Howard is too quick on his release when he shoots, but when he sets up it looks real good. But when he bends down before he shoots it’s just a train wreck. He has no arc on the ball at all. But with Nowitzki, you can tell he practiced shooting all of his life. He’s a jump shooter. I don’t think Dwight Howard ever practiced shooting.

SLAM: What about the notorious “granny style” shot that Rick Barry rocked back in the day? He was a 90 percent free-throw shooter over a 15-year NBA career—why has nobody used it since? Shaq was considering it, would it have helped, or lost cause?

JL: I always wanted to get in touch with Rick because I could never get it right. It has to have its own art to it, its own philosophy to it, and I always wondered what that is. I do know it’s a two-handed follow through, but I could never figure it out. Shooting as well as Rick did is nothing to sneeze at. And Shaq said he didn’t do it because it’s “not cool.” But how often did Shaq, or Wilt for that matter, even practice free throws? That alone would have helped.

SLAM: We’ve all seen games that have been blown at the line. Why do free throws magically become more difficult—even for great players—with the game on the line?

JL: What you have to do when you go to the foul line is do the exact same thing every time. How you shoot the ball 15 seconds into the game should be exactly the same when you shoot it with five seconds left in the game, regardless of the circumstances. When I stepped to the line in games, the mindset was that it was just me and the basket, in my backyard. The end result was the ball going in the basket.

SLAM: The free throw is an oft-overlooked aspect of the game, why is that?

JL: Again, we grew up in the country, so we couldn’t walk down the street and go to the park to play five-on-five, like you can do in the city. I think that’s why the rural kids go to the park and play on their own.

SLAM: I never thought of location as a reason for different players’ games developing the way they do.

JL: Absolutely. If you’re in the city and there are no open courts, you need to play five-on-five in order to play. And kids go on ESPN and see dunks and threes. When I go to high school games and watch the kids shoot around at halftime, that’s exactly what they do. They’re not out there practicing free throws or 10-footers. Dunks and threes. And from now until the end of time, free throws will remain the deciding factor of games. Most NBA players are good foul shooters, because that’s their job. From elementary school through college, it’s up to the kids to find time to practice.

SLAM: And to read your book.

To learn to shoot like Jim Lee, or just improve your effectiveness from the line, purchase Fifteen Feet For Free at fifteenfeetforfree.com/purchase.