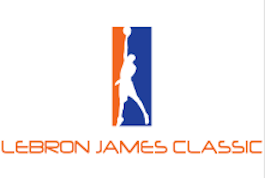 Announcement from our friends at Scholastics Play By Play Classics below:

The inaugural LeBron James Classic takes place at The LeBron James Arena on the campus of St. Vincent-St. Mary High School (STVM) on December 20th and 21st, featuring the top teams and players from national and local schools.

This event promises to be one of the nation’s best showcase events, in just its first year of existence. Host school, STVM plays national stalwart St. Benedict’s on Saturday and a long awaited meeting with Jackson High School on Sunday. STVM is a 6-time boy’s basketball Ohio High School State Champion (1984, 2000, 2001, 2003, 2009, 2013) and is a perennial power. LeBron James VM03, kept a promise to his alma mater last year by donating over $1 million dollars to renovate the school’s gymnasium and to be renamed in his honor. James led the Fighting Irish to three states titles and one national title in four seasons and has won two more NBA championships with the Miami Heat while establishing himself as the best basketball player in the world. His return to Cleveland has energized Northeast Ohio. He is excited to have this event with his namesake at his old school.

“We are excited to host the inaugural LeBron James Classic. The response has been great, as we have put together a great showcase of top national and local teams. Fans in this area will be treated to some great high school basketball.” — Dru Joyce, St. Vincent-St. Mary Boys Basketball Coach