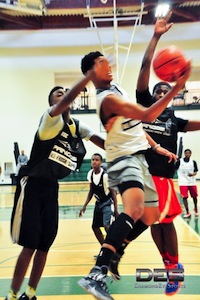 Remember growing up playing with your brothers and cousins in the backyard as a kid? Sure it was always fun, but everyone was competitive, elbows were exchanged and the ultimate “yeah we’re tight, but I’m here to prove I’m the alpha in this family” poke-out your chest match was inevitable. That’s exactly how the 2013 Pangos All-East Freshman/Sophomore Camp felt this weekend. Two classes, 2017 and 2016 (with a few fortunate 2018’s mixed in), that know each other so well as a result of growing up battling in the grassroots backyards of New Jersey, New York, DMV, and Philly amongst other areas, took to Pangos to display their abilities. Over the course of two days, some players reinforced what we did know about their games and standings, while others made introductions.

On Day one, Austin Harriot let all wings in 2016 know it’s a new day. The 6-4 guard from Philly (Germantown Friends) used his strong build and spark-like athleticism to get to any spot on the floor he desired. Harriot’s Oladipo-esque frame and balanced abilities to direct his team but also battle down low for boards and finish at the rim. Harriot’s teammate for the weekend and fellow 2016-er, Richmond Aririguzoh (Trenton Catholic, NJ) showed shades of one day being an elite level shot blocker, protecting the rim against guards and bigs alike.

Vermont Academy forward Sedee Kieta has a huge ceiling since his mobility, agility and timing are all guard-like and that’s no mistake. Blessed with an eight inch growth spurt a-la Anthony Davis last year, he went from an unknown guard to high-major big because his only necessity now is skill work. At an age where bigs can struggle to walk and chew bubble gum, Keith’s

2017 guard Tamir Green might be… OK, is, he is small, but the 5-6 freshman from Philly (Parkway Center City) uses his size and speed to his advantage, getting to spots that others cant, making passes that most don’t see and even shot a floater over bigs more than a foot taller than he is. Another smallish guard that left a big impression on people from day one was DeMatha Catholic guard Alani Moore (Hyattsville, MD). Known for his power, quickness and ability to direct teammates and tempo, Moore showed not only can he blow by opponents, but can dominate from the outside with his much improved jump shot. At 5-9 and a true sophomore, he has time to grow physically and mentally which means good news for the Stags, bad news for other guards in his class. Teamed with Moore was fellow Maryland product, AJ Wilson. The 6-6 wing has springs and doesn’t hesitate to use them. Lost track of the amount of dunks he made on day one alone.

Other Day One sophomore standouts included Lamar Stevens (6-7, Haverford School, PA) who can face up and attack or play above the rim in transition, Khalif Korma (6-8, Roman Catholic, Philly) who is a big bodied post that plays with his back to the basket, a rarity in today’s “everyone taller than 6-5 is Kevin Durant” era, 5-11 guard Vaughn Covington Jr. (Newman-Goretti, PA) who loves to penetrate to either finish at the rim or find teammates.

The freshmen who left impressions were, 6-5 guard/forward David Caraher from Chapel Hill, NC started out the day going 3-for-4 from the 3-point line and then crashing the boards with the bigs for put backs. Wilmington Delaware’s Eric Ayala (Sanford), who is a 6-2 raw scoring talent, Shaheed Haynes (6-3, Imhotep, Philly) who’s big body is matched by an ability to shoot the deep ball and White Plains, New York’s Jordan Tucker (above), who at 6-7 can play either the one, two or three and is sure to be a high-major recruit. Eighth grade invite, 5-10 Tre Wood from Sheridan School in Marlboro Maryland who spent the weekend mixing anyone that stepped up to defend and making passes to cutting teammates.

Day two of camp opened up behind great guard play from sophomore trio Danny Duffey of Huntington Valley (5-9, Lower Moreland HS), Trent Watson from Dover, DE (Poly Tech HS) and New Jersey product Bryce Aiken (5-10, The Patrick School). Duffey was a prototypical Gonzaga-type point guard (no affiliation to the school, of course). Maximized everything he can with playmaking ability, which masked his small size since he continuously made the right play. Watson used his big upper-body to finish through contact on and-one plays in the half-court setting and in transition, and spent the weekend making his way to line on one end and locking up defenders on the other. Aiken, who quite frankly might be the best playmaker in the class regardless of region, made plays that only players with a special breed of court vision can make. Setting up teammates and creating for others is second nature to him.

Another 2016 guard that stood out, if you could keep up, was the requickulous Stevie Jordan (left). Blazing by defenders, finishing through contact on players with bigger builds and making the right basketball play were the most impressive attributes for the  5-8 Philly guard from Conwell-Eagan high school.

Other day two standouts included St. Benedict’s freshman Trevon Duval (6-2, Newark, NJ), who’s a true floor general with a high-IQ, long arms and deceptive athleticism (he caught a few exciting dunks and one missed dunk on a defender that still made the gym jump) and 6-2 Imhotep guard Ahmad Winbush (Philly) who’s tough on court aggression and toughness was evident on defense. Sophomores Seed Cisse (Truman, Bronx, NY) who possessed bounce beyond his years and 5-11 guard Zay Jennings from Central Catholic (Allentown, PA), who rained high-arching bombs from beyond the three off the dribble all weekend also showed out.

The final day truly belonged to DeMatha’s high prospect Joe Hampton. Already considered a high-major player in a really deep class, the 2016 combo forward played on the perimeter making pays for other, knocking down threes; mid-range shooting over taller defenders (Hampton is 6-6), and banging down low on the block with post-moves and savvy well beyond his years.